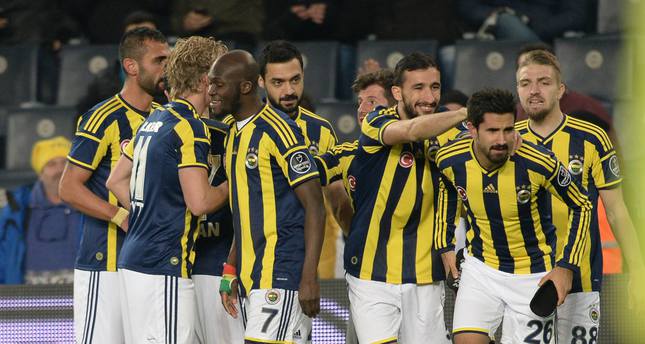 Fenerbahçe head coach İsmail Kartal declared himself happy with the way his side finished off the first half of the season, beating Başakşehir 2-0 at home as their fine home form continues.

After an iffy start to the season for Fener, the Kadıköy team have come back strong, routinely going back and forth with the league leadership with Beşiktaş.

The Istanbul side have now gone unbeaten in their last 10 league games, winning eight and drawing while keeping Beşiktaş under pressure at the top of the table.

On Saturday, they made sure they continued clipping away at the Black Eagles' heels with a comfortable win over one of the league's most formidable defenses. Başakşehir had conceded just six times in 15 games prior to Saturday's game, comfortably the league's best defensive record, seven ahead of Fener's record, who are joint second with Beşiktaş in the defensive metric.

A first-half header from Dirk Kuyt and a second from Alper Potuk secured the points for the Istanbul side, taking them into the winter break in a strong position.

Kartal said, "We beat Başakşehir without giving them many opportunities. We got three points from one of the most powerful teams in the league. We have won eight matches in the last 10-match period. My footballers deserve a good holiday. We will prove that we are the favorites for the league by working hard ahead of the second half of the season. The first half of the season was very difficult for us. There were footballers who came back late from the World Cup. I suddenly found myself as a head coach of the team, but we got over this difficult period thanks to the plan we made in cooperation with our footballers.

Encouragingly for Fenerbahçe was the performance of Potuk, who was able to get a birth in the team thanks to injuries to strikers Emmanuel Emenike and Pierre Webo. The 23-year-old took his chance and impressed Kartal. The goal could end up having greater repercussions as Fener look to rejig their front line ahead of the second half of the season. Emenike and Webo are missing through injury with Moussa Sow will leave for international duty, representing Senegal at the African Nations Cup. Gençlerbirliği's Erkan Zengin has been floated as a possible new transfer, but maybe Potuk has given Kartal some food for thought, even if the coach has his heart set on Zengin.

Despite Emenike's injury, Fenerbahçe are keen to hold onto their striker and they are believed to have turned down transfer offer worth 10 million euros from Tottenham Hotspur. Fenerbahçe president Aziz Yıldırım revealed he rejected an offer bid worth 10 million euros for Emmanuel Emenike. "The offer for Emenike came and they offered 10 million euros. However, I trust him; therefore, I rejected the offer," Yıldırım said, adding, "I trust Emenike and Diego. Emenike, as well as Diego will add to the strength of our team in the second half of the season. They will give the performance expected of them. They will make a major contribution towards our success. I have no doubt about this."

Elsewhere, Bursaspor pick up 3-1 win over Akhisar Belediyespor. Jose Pesqueira netted the opener on the stroke of half time before Renato Civelli and Fernandao put the game to bed with a pair of strikes inside the first 10 minutes of the second half, while İsmail Konuk scored a consolation goal for the visitors. Djalma Campos saved a point for Konyaspor as they drew 1-1 away with Çaykur Rizespor.