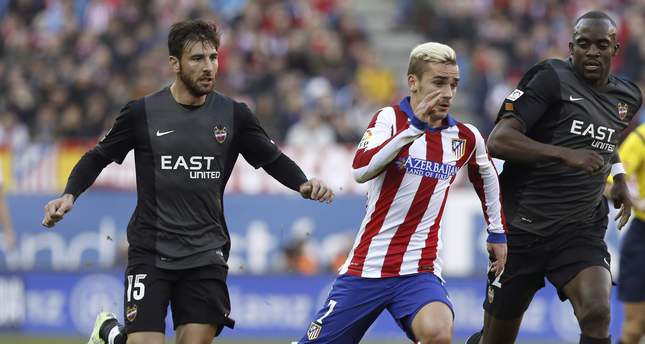 by Jan 04, 2015 12:00 am
La Liga champions Atletico Madrid remained in the race to retain their title with a comfortable 3-1 win over Levante on Saturday thanks to two goals from Antoine Griezmann.

With Fernando Torres watching on from the stands before his move back to his boyhood club is concluded on Monday, Griezmann was under pressure to continue his fine form after scoring a hat-trick as Atletico closed 2014 with a 4-1 win away to Athletic Bilbao two weeks ago. And he duly obliged with two headed finishes from close range early in each half before Diego Godin nodded in Atletico's third after Nabil El Zhar's deflected effort had given Levante hope.

Torres was the star attraction before kick-off as he took his seat in the directors' box to much acclaim. However, on the field, Griezmann ensured Los Rojiblancos' former captain will find it hard to get into the side for the visit of Real Madrid in the Copa del Rey on Wednesday. Atletico coach Diego Simeone, though, suggested Griezmann could eventually move out wide, where he has played for the majority of his career, to make way for Torres.

"More than just the goals, which are important for him and the team, I like when he tracks back, works and when he wins the ball back to be able to attack from better positions," Simeone said of Griezmann. "He can play in different positions, as well as on the wing where he has played before. Not all games are equal and there could be times when all the forwards play." Mandzukic was again heavily involved as he did brilliantly to turn Victor Casadesus's header off his own line, but the ball fell to Ivan Lopez and his drive clipped El Zhar on its way into the far corner.

Simeone then withdrew Turan and Mandzukic with one eye to Wednesday's repeat of last seasons' Champions League final against Real. And, not for the first time this season, the Argentine's side needed to rely on their threat from set-pieces to seal the three points eight minutes from time when Godin headed home Tiago's in-swinging cross.