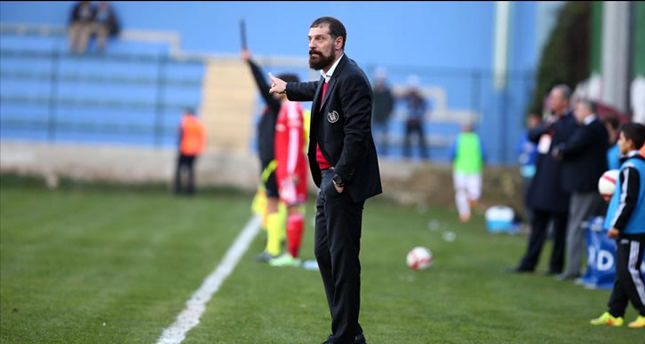 Beşiktaş coach Slaven Bilic described his side's loss to Galatasaray as "hard to accept" while labeling Veli Kavlak's push on Wesley Sneijder that earned the midfielder a red card as "naive and stupid."

The Croatian coach is still without a win in a big Istanbul derby and the 2-0 loss to the Yellow-Reds on Sunday night saw his side lose their place at the top of the table, with Fenerbahçe now leading the way after their win on Saturday.

Felipe Melo opened the scoring after 50 minutes, volleying in a cross after a Beşiktaş defensive breakdown, allowing the Brazilian to shoot unmarked past Tolga Zengin with his shot thumping into the ground and bouncing beyond the goalkeeper. Melo would later leave the game with an injury.

On a wet and muddy pitch, Beşiktaş struggled to get a break through and at times were incapable of knitting together a cohesive move. Their cause was hurt further when Kavlak was given his marching orders in the 62nd minute after pushing Sneijder in the face. While the Dutchman made a meal of the minimal contact, Kavlak left the referee with no choice but to send him off

With Beşiktaş down to 10 men and struggling to find the openings for an equalizer, Burak Yilmaz broke clear in the last minute of the game, running from the half way line unimpeded before calmly finishing, securing the three points with the last kick of the game.

Bilic couldn't hide his disappointment after the game, bemoaning his side's poor defending for Melo's goal and calling out Kavlak's stupidity.

It is really hard to accept losing," Bilic said. "We lost in a similar fashion against Fenerbahçe. We were not bad in the first half but conceded a soft goal after the break due to our poor defending. Afterwards we were forced to chase the game but the red card really hurt us. [Kavlak's decision] was a naive and stupid move, I cannot believe what happened and we suffered afterwards. It was really tough to compete with 10 men, we hit the crossbar and gave it our best shot, but the players were exhausted towards the end of the game."

The result means that Fenerbahçe now hold top spot with 36 points at the halfway stage of the season while Beşiktaş and Galatasaray are hot on their heels with 35 points each.

Galatasaray midfielder Selçuk İnan said he was happy to beat Beşiktaş and that the win was made all the harder due to the poor pitch conditions as well as agreeing with Bilic over Kavlak's dismissal.

"We are very happy to defeat Beşiktaş. We believed that we would win. I talked to my friends on the Beşiktaş team. I said to them that it was very difficult to play on such a lousy field. Veli deserved to be given a red card, I think. I warned him and said 'please don't do it'. I don't want my fellow footballer friends to be out of the game. But Veli's hand touched Sneijder's eye. He must not do such things," İnan said.

Galatasaray's Melo said, "Before the match, I had said that we were gonna play against a team that plays the best football in Turkey, and it happened exactly in the way that I said. I thank all my friends who supported each other 100 percent. I was injured and had to leave the field. Every player has an alternative backup at Galatasaray. I could have continued to play but I did not want to take a risk."