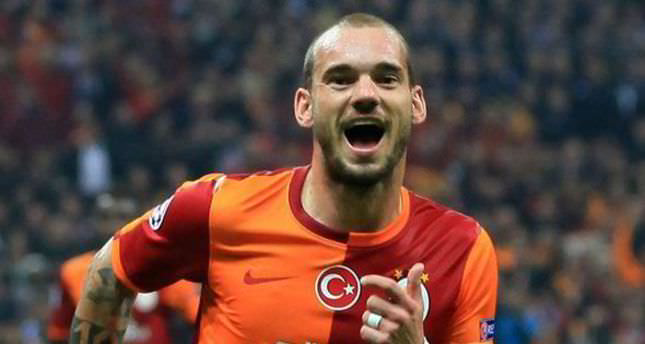 by Daily Sabah Jan 08, 2015 12:00 am
The future of Turkish powerhouse Galatasaray's internationally renowned star Wesley Sneijder remains a mystery as a number of clubs continue to tussle for his servicves. Despite names at Galatasaray being insistent that the midfielder will stay, the director general of Juventus, Beppe Marotta, has claimed that Sneijder wants to join Juventus, even though Galatasaray want big money for him. Moratta underlined that they'll only buy him from Galatasaray "on our terms." The director general spoke to Sky Sport Italia and said, "I must say Sneijder is a talented player and one whose characteristics are congenial with our tactical system. There isn't a genuine negotiation in place yet, as we only got information on the player's intentions. If we have the opportunity to get him on our terms, then that's fine. Galatasaray want big money that we absolutely do not intend on spending. In the January market you seek opportunities. We already have a satisfying squad, so if impressive opportunities arise, then we will grab them, but at the moment there are none." Sneijder's agent claimed that Galatasaray would only release the Dutch international for his buy-out clause, which is 20 million euros. The rumors have had it for a long time that Galatasaray will sell him due to their financial problems hence the reasons why the Dutch player was not fielded in several matches earlier this season. However, Galatasaray midfielder Selçuk İnan believes that Wesley Sneijder will remain at the club this season.

"I only know about the Sneijder rumors through the newspapers and television," İnan told Turkish television TRT.

"But I actually know Sneijder and I can tell you he is really happy in Turkey, he has settled down, we all get on really well with him, he has lots of friends here and he loves the club. I cannot see him leaving." İnan also revealed that he believes Galatasaray will become champions this season. "We really want to win the league title and get that all important fourth star," İnan said. "We want to make history, however much our rivals want the title, believe me when I say we want it 10 times as much."

Galatasaray's head coach Hamza Hamzaoğlu also believes Sneijder will stay in Istanbul despite being closely linked with a move to Juventus. "Sneijder likes it here, we love Sneijder, I do not think he will be going anywhere," Hamzaoğlu said.

Meanwhile, Manchester United are set to battle Juventus to secure the signature of Sneijder, according to the British newspaper the Daily Star. Louis van Gaal has been monitoring the Netherlands international with the view of signing him this month. Juventus manager Massimiliano Allegri has also confirmed interest in the 30-year-old. About Sneijder, Sneijder's agent Guido Albers said, "let's see if he comes before speculating on where he'll play. For the moment he's still a player with Galatasaray."

Allegri said, "The objective for Juventus has to be that of improving the team. And to improve on the technical level we must get players who are, qualitatively speaking, at the same level as those wae already have, or even better. I think this team has the possibility of improving, regardless of the characteristics of the players. Sneijder of course has some great technical qualities and he's proven that over his career. He'd be completing a strong midfield, which would also create competition in that department, and that's important. January is a strange market. We have to be realistic and see which players we can get, and some of those can't play in the Champions League."

Meanwhile, the Lions boss Hamzoğlu also underlined that his side still have as good a chance as any team in terms of winning the title. "We are still very much in the title race," Hamzaoğlu said.

"The first half of the season went well but we still have a lot of work to do over the winter break. Our aim is of course to win the league." Galatasaray are currently in third place on 35 points just one behind league leaders Fenerbahçe.

Furkan Özcal, Gökhan Zan, Veysel Sarı and Umut Gündoğan will be leaving Galatasaray in January, according to head coach Hamzaoğlu. "Unfortunately we will be parting ways with Veysel Sarı, Furkan Özçal, Gökhan Zan and Umut Gündoğan," Hamzaoğlu said. "Yekta Kurtuluş could leave as well if we receive an offer for him. We want to reduce the size of our squad so these transfers are a must. I want all the players in the squad to be fighting for a place in the team and with the current number of players we have that is impossible. I want the best for Galatasaray and the fans, we want to win the title and get the fourth star at the end of the season." Galatasaray currently have 32 players in the squad, Hamzoğlu plans to reduce this number to 26.