Messi to stay in Barcelona, hits back at rumors 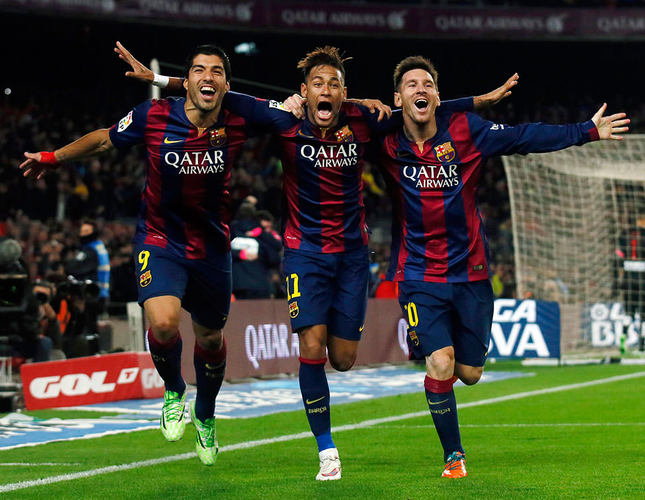 Barcelona forward Lionel Messi almost single-handedly restored peace at Barcelona by scoring once and setting up two more goals in a 3-1 win over Atletico Madrid on Sunday, before speaking out about the chaotic week for the Catalan club. Messi passed for goals by Neymar and Luis Suarez before he scored his 25th goal in as many games this season. He then denied media reports by saying he never called for Coach Luis Enrique to be replaced. He also shot down speculation that his father had spoken to Premier League powerhouses Chelsea and Manchester City.

The Argentina and Barca captain was responding for the first time to widespread reports of a falling out with Luis Enrique, who took over from Messi's compatriot Tata Martino at the end of last season. Messi's apparent dissatisfaction with the coach's management style and tactics was said to have prompted talks with Chelsea and Manchester City on a possible move to the English Premier League, while Catalan television claimed Messi had demanded Luis Enrique be sacked.

"I haven't asked for anything to stay here because I have never wanted to go anywhere else," Messi told Barca's TV channel after Sunday's 3-1 La Liga win over champions Atletico Madrid.

"I have also heard that my father has spoken to Chelsea and City but it's all lies," added the 27-year-old. "There have been stories that I had bad relationships with (Pep) Guardiola, (Samuel) Eto'o, (Zlatan) Ibrahimovic and Bojan (Krkic), that I have got rid of people. That is in no way true. I never asked for them to get rid of the coach or anyone else. There is no rivalry between Luis Enrique and me."
Messi's status as a hero to Barca fans for his key role in their most successful era makes him a powerful figure at the club but he dismissed claims that he has influence over important decisions.

"I am tired of hearing things about me," Messi said. "They say that I run the club when I am just another player. I don't make those decisions, nor have I asked them to be made.

"It hurts because (the stories) have come from the Barcelona-based media and not from Madrid.

"There are people who want to damage the club and it's important that now more than ever we are united because there are important things ahead."

Messi had missed training on Monday, citing a stomach bug, after being left on the bench by Enrique for last weekend's 1-0 defeat to Real Sociedad.

And he sent the rumor mill into overdrive later in the day by following Chelsea and two of their players Thibaut Courtois and Filipe Luis on social media site Instagram.

Sources in the Catalan press then claimed Messi had met with Barca president Josep Maria Bartomeu in midweek to ask for the former Barca captain Enrique to be replaced as coach.

Messi had a busy night against Atletico, netting one goal, setting up Neymar and Luis Suarez to score and conceding a penalty for the first time in his professional career.

He also picked up a rare booking for a high-footed challenge on Atletico goalkeeper Miguel Angel Moya. "This win has a special value because it is against a direct rival for the league," his teammate Luis Suarez said. "At the moment the self-confidence in the team is good. This win will gives us a big boost because it came against Atletico Madrid.

"It is spectacular to play with Messi and Neymar, just like the rest of my team-mates. We have achieved a great victory."The win lifted Barca to within a point of leaders Real Madrid, who have a game in hand, with Atletico are three points further back in third.