Brazilian star Neymar: It’s great to be back in Turkey 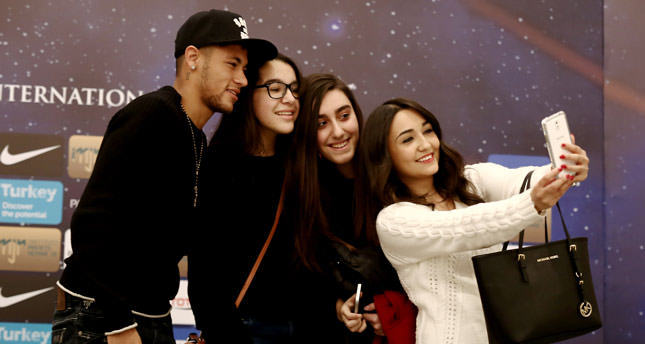 by Daily Sabah Jan 16, 2015 12:00 am
Barcelona's Brazilian star Neymar, who is involved in organizing a friendly tournament in Alanya, Antalya this week, revealed that he is pleased to have returned to Turkey ahead of the International Royal Cup, according to Turkish-football.com. The tournament, which will start today in Alanya, will involve Neymar's own team, Instituto Projeto Neymar JR, Galatasaray, Beşiktaş and Argentinian giants River Plate. |

"I have friends who play and have played in Turkey, Beşiktaş and Galatasaray have excellent players and these are both huge clubs with great futures ahead of them," Neymar said. "It is great to be back in Turkey, I want to thank the Turkish people once again for their warm welcome, it really is great to be back here." Neymar also praised Atletico Madrid star Arda Turan.

"Arda Turan has a lot of potential, he is a great player and someone I admire, he is a man who has written his own history and will continue to do so," Neymar said. Barcelona superstar Neymar has said that he supports Fenerbahçe due his former team-mate Diego Ribas playing for them. "I watch quite a lot of Turkish football," Neymar told Akşam newspaper. "I am a Barcelona player at the moment but maybe one day I will play in Turkey. I support Fenerbahçe because Diego plays for them."

Brazil national team star Neymar admitted that the Turkish fans won him over when he led out his side against Turkey in a friendly game last year and that Turkey would always have a special place in his heart. The Selecao ended up beating Turkey 4-0 at the Şükrü Saracoğlu stadium with Neymar scoring a brace and providing one assist.