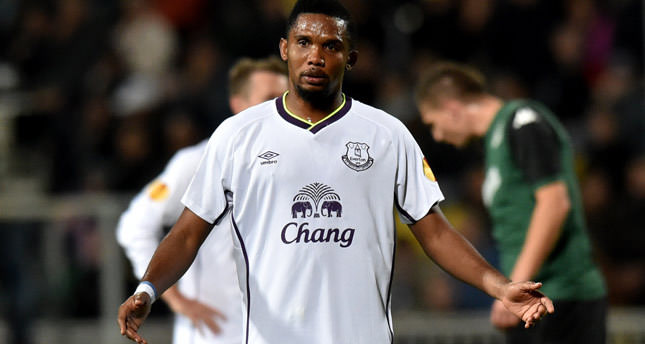 by Hakan Baş Jan 17, 2015 12:00 am
Reports in the Turkish media claim that Barcelona forward Samuel Eto'o could join Istanbul giants Fenerbahçe in the upcoming transfer window. The Cameroonian star has been on Fenerbahçe's shortlist for some time. Fenerbahçe are having difficult times in their forward line at the moment after their star striker Emmanuel Emenike said he is considering parting ways with the club. Eto'o also said he's unhappy at his current club, Everton, and he hasn't hid his desire to leave. He has managed to play the full 90 minutes in just seven games this season.

Fenerbahçe President Aziz Yıldırım has admired Eto'o for years and has been trying to bring him to Fenerbahçe since 2008. The 33-year-old forward is said to like Istanbul and is leaning towards coming to Fenerbahçe. However, according to some news report in the Turkish media, Eto'o is said to have made his decision and would prefer to play for Italian Serie A club Sampdoria. According to the reports, Eto'o wanted 2 million euros for a mutli-year contract. Eto'os agent Claudio Vigorelli said, "Eto'o's family lives in Milano. So he wants to end his career in Italy.

A couple of clubs contacted us in the last 12 hours so I decided to leave him out. We will see what is best for him and us over the next few days."

The Italian club have contacted Everton about the Cameroon striker, who only joined the club from Chelsea in August on a two-year deal. Eto'o, has scored three goals in 14 league appearances this season. Eto'o will become the second striker to depart Goodison Park this month, after Hallam Hope moved to Bury for an undisclosed fee. The veteran striker has previously played for Real Mallorca, Barcelona, Inter Milan and Anzhi Makhachkala during a glittering career.