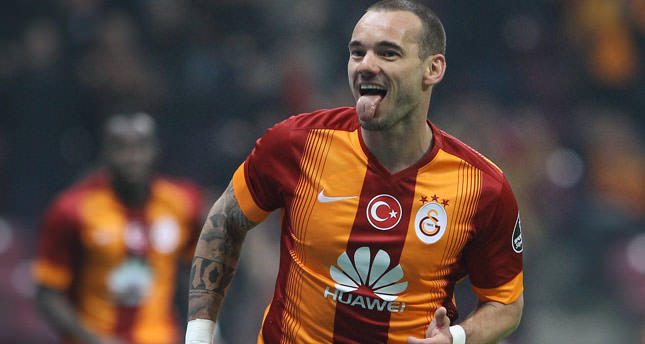 The Lions secured a comfortable 2-0 win over Çaykur Rizespor in the Turkish Super League. Wesley Sneijder both scored and assisted, making him the star of the game

After Fenerbahçe, Galatasaray, the other favorite of the Turkish Super League, made a good start for the second half of the season. The Lions toppled Çaykur Rizespor 2-0 in the week 17 game at Türk Telekom Arena in Istanbul on Sunday. Home team Galatasaray were off to a flyer in the seventh minute. Gala's central midfielder Selçuk İnan trapped the ball in the box and passed it to his teammate Wesley Sneijder. The Dutch playmaker found the net by means of a ground shot, leaving the score 1-0. Right before the end of the first half in the 44th minute, Galatasaray doubled the margin. Portuguese wunderkind Bruma chipped the ball over Rizespor goalie Serkan Kırıntılı to make the score 2-0 with Sneijder's assist. In the 81st minute, Galatasaray's Turkish striker Burak Yılmaz was obliged to get subbed-out because an injury he sustained acted up. With two minutes to go, the referee brandished Selçuk İnan a yellow card after penalizing Ludovic Obraniak, meaning Selçuk will miss next week's touch encounter against Bursaspor next week. After clinching the win and raising their points to 38, Galatasaray climbed to the second spot in the Turkish Super League while Rizespor remain in the drop zone.

Meanwhile, Galatasaray board member Ali Dürüst said the club denied interest in Super League goal king Jose Fernandao, a Bursaspor striker. "The rumors about Fernandao are rumors; we have not made an offer and we are not in talks with the player in question," Dürüst was quoted as saying. Fernandao is currently on loan to Bursaspor from Atletico-PR. The Green Crocodiles have a buyout clause worth 5 million euros that remains active until the end of the season. The 27-year-old has 12 goals and one assist in all competitions this season. Fernandao scored his 11th Super League goal against Konyaspor on the weekend, taking him to the top of the goal scoring charts alongside Akhisar striker Gekas and Galatasaray's Yılmaz. Bursaspor beat the Anatolian Eagles 3-2 to move into fourth place with 29 points. The Green Crocodiles have scored more goals than any other Super Leaguer side this season, and Bursaspor have scored 17 goals at home, 17 goals away and are managed by former Turkish national team coach Şenol Güneş.

Elsewhere, Suat Altın İnşaat Kayseri Erciyesspor secured their first win away from home this season with a 2-1 victory over Kardemir Karabükspor. The away side came back from a 69th minute goal with strikes from new transfer Royston Drenthe and Silva. The victory leaves Erciyesspor in 12th place in the Turkish Super league. In response, Karabükspor manager Tolunay Kafkas has resigned following his sides 2-1 loss. "I have resigned, I want to thank the president, the board and the people of the city for the support they have given me," Kafkas told Lig Tv.

The Super League had a grand total of 40 managerial appointments in 2014. Managers in the Super League last an average of seven months and 14 clubs changed managers in 2014. Kafkas has become the first manager to resign from his position in 2015.

Kasımpaşa Manager Shota Arveladze, Beşiktaş head coach Slaven Bilic and Bursaspor boss Şenol Güneş are the only managers to stay in the job for seven months or longer according to turkish-football.com. Gaziantepspor boss Okan Buruk, Başakşehir head coach Abdullah Avcı and Fenerbahçe boss İsmail Kartal were all appointed at the start of the season. The record for most managerial changes goes to Trabzonspor and Gençlerbirliği. Trabzonspor have been coached by Mustafa Akçay, Hami Mandıralı, Vahid Halilhodzic and current manager Ersun Yanal in 2014, while Gençlerbirliği have been managed by Mehmet Özdilek, Kemal Özdeş, Mustafa Kaplan and current boss İrfan Buz in 2014.