Atletico lose against Barca as Turan loses his temper 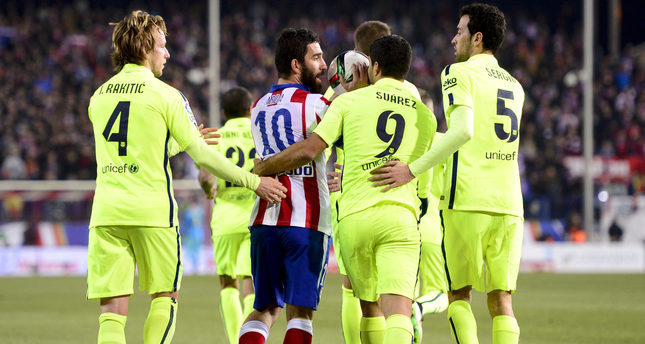 by Daily Sabah Jan 30, 2015 12:00 am
Barcelona beat Atletico Madrid 3-2 in the second leg of the Copa del Rey quarter final. Turkish star Arda Turan threw his boot at a linesman but luckily for him, he was only shown a yellow card

Forty-five minutes of exciting football quickly turned sour after Atletico Madrid found themselves down a man heading into the second half of their Copa del Rey clash with Barcelona.

The game began its tailspin when an off-camera altercation took place between players in the tunnel after the first interval, resulting in Atletico going down a man when midfielder Gabi picked up his second yellow card. Shortly before the incident, however, tempers between the two sides flared, as Fernando Torres and Neymar were seen exchanging words. Torres even delivered a shove that went unpunished.

The situation took a strange twist shortly after the resumption of the second half. In the 48th minute of the game, Atletico's Turkish winger, Arda Turan, threw his boot at a linesman in protest at the referee's decision to play on after he claimed that he was fouled. The boot missed the linesman, but the referee still showed Turan a yellow card.

Atletico midfielder Mario Suarez was sent off during the match for fouling his opponent. It was Suarez's second yellow card and Atletico Madrid were obliged to compete against Barcelona with nine men.

Turan's reaction went viral on social media. Some likened Turan's reaction to the shoe thrown at former U.S. President George W. Bush in 2008 in Baghdad by a protesting Iraqi journalist. A social media user tweeted "Arda throws his shoe when he is frustrated, like an Iraqi." Spanish newspapers were surprised by Turan's temper. Marca wrote: "Arda Turan's good play was overshadowed by the shoe he threw. Arda should have been shown a red card."

Meanwhile, Atletico Madrid went too far in a bid to unsettle Barcelona in their King's Cup defeat on Wednesday but coach Diego Simeone was proud of his team's rebellious streak. Simeone's side ended with nine players and could have had others sent off as they adopted an overly physical approach in their quarter-final clash at the Calderon, which the Catalan side won 3-2 to advance 4-2 on aggregate.

"It was an extraordinary first half and we showed a real rebellious attitude that was great," Simeone told reporters.

"In the second half I told them not to take risks and concentrate on not conceding goals. I thought it was the best decision for the team and the club after the way the first half went."

Fullback Juanfran Torres, who had a running battle with Barca's Neymar during the game, defiantly said they would continue to play the same way.

"It doesn't bother us what people say. What I see is a lot of envy," he said.

"Our way of playing is to be intense and strong and we are not going to change. People should stop saying what is not true but we are just concentrating on ourselves."

Atletico knocked Barcelona out of the Champions League last season on the way to the final and drew with them in the last match of the campaign to win La Liga but Luis Enrique's side have had the edge recently.

Simeone's team are still well placed in third position in La Liga, four points off the pace, and in the Champions League last 16.

Their tactics on Wednesday showed they will do whatever is necessary to keep challenging the traditional dominance of Spanish giants Barcelona and Real.