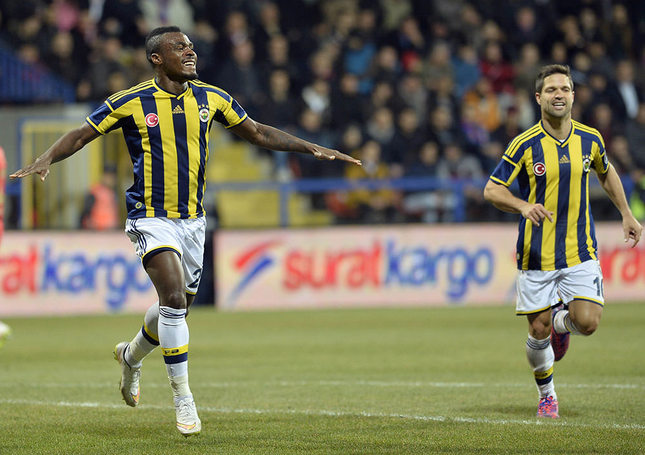 While Fenerbahçe stay on top after their 2-1 win against Karabükspor, Emenike scored his first goal in 90 days, although it wasn’t as long a drought as Selçuk Şahin who hadn’t scored in two years

Emmanuel Emenike may have the spirits to thank for his match-winning performance on Saturday when Fenerbahçe beat Kardemir Karabükspor 2-1. The Nigerian had undergone "treatment" to remove a curse that he believes someone put on him back when he was in his native country.

Whether through placebo or super natural behavior beyond the reach of modern science, Emenike looked to be unburdened as he slotted home in the 58th minute to grab the winning goal and keep Fenerbahçe top of the Turkish Super League. It was his first goal in 90 days, although it wasn't a long a drought as Fener's other goal scorer Selçuk Şahin who hadn't scored in two years.

Emenike had said before the game that his "energy is not right, something is wrong, I just need a goal to get back to form." He will be hoping that Saturday's goal will be what lifts the former Tottenham Hotspur target back into form.

While Saturday's win may seem routine for the league leaders, it was anything but with Karabükspor something of a bogey team for the Yellow Canaries, winning their last three contests. The form still favored Fener who went into the game on the back of a seven-game winning streak.

They started the game quickly with Gökhan Gönül's attacks on right wing putting a strain on the Karabükspor defense.

In the seventh minute, Şahin netted past Karabükspor keeper Boy Waterman from outside the penalty area to give himself the perfect birthday present.

After the goal, Fenerbahçe put the pressure on. However after 15th minutes the tempo of the game slowed down allowing the hosts Kardemir Karabükspor play more with the ball, although they could not manage to produce the goal they were looking for while Fenerbahçe also could not take advantage of the counterattack opportunities.

The breaking point of the match happened in 58th minute. Dirk Kuyt gave the ball away to Valentin Viola. Viola caught the Fener defense off guard but missed the goal. After that position, Caner Erkin made a long pass to Emenike. He suddenly cut behind Karabükspor's defense and scored Fener's second goal and at the same time he broke his own 10-game scoreless streak.

Karabükspor gave themselves hope in the 75th minute. Viola crossed the ball from right the wing and Abdou Traore leapt to score with his head.

The goal made for a tense last 15 minutes but Fenerbahçe held on to keep themselves at the top of the table with 39.

Speaking about his inconsistent performances, Emenike said, "I was always the same Emmenike. I never changed actually. Football is an interesting game. No matter how hard you work you sometimes just don't get the luck. Everything you do seems bad then. The only thing to do is continue to work harder.

"We are working as a team. All my team-mates make the effort to make the pass to me during matches."

Fener's goalkeeper Volkan Demirel made a scene with rival fans similar to the one happened that in the national team's game against Kazakhstan. The crowd cried "traitor" at Demirel.

During the national match against Kazakhstan, some fans had directed verbal abuse at Demirel, who took his gloves off and left the pitch.

Elsewhere, Sivasspor grabbed an away win against Gaziantepspor, winning 3-1. Muhammet Demir scored after 27 minutes to give the home side the lead going into the second half but a three-rally saw Sivasspor take the lead as they netted twice between the 54th and 56th minutes. Kadir Bekmezci made the win certain with 15 minutes to go.

Istanbul Büyükşehir Belediyespor won away from home, with Semih Şentürk scoring from the penalty spot with 11 minutes to go.

Kasımpaşa had two men sent off in the 1-0 loss, with Adem Büyük and Tunay Toran both picking up two yellow cards.