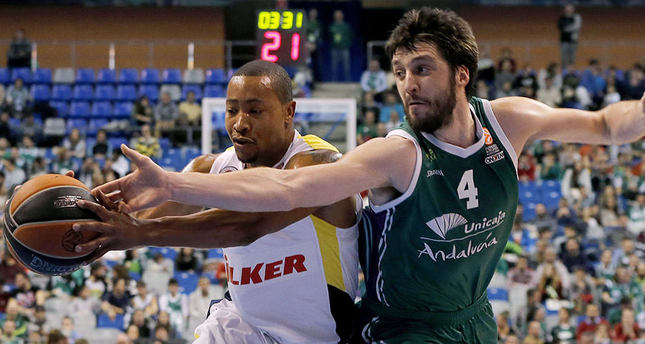 by Kenny Laurie Feb 01, 2015 12:00 am
Fenerbahçe star Andrew Goudelock credited his side's defensive performance for their 68-60 win over Unicaja Malaga. The Turkish side dealt Malaga their fifth straight loss of the Top 16, an oddly poor run of form considering their domination of the Spanish league, widely considered to be the best league in the world after the NBA. Malaga have now lost their last 10 games in the competition, including the regular season.

In the Top 16, Fenerbahçe now boast a winning record for the first time and continue their record of no defeats away from home in their last six EuroLeague games. At 3-2, Fener may now be able to move on from two crushing home losses to CSKA Moscow and Olympiacos. Malaga were held to just 60 points with Fenerbahçe putting the hammer down in the third set where they conceded just 10 points. On the other side of the court, Fenerbahçe overcame a poor 3-point shooting performance win. While most struggled from deep, Goudelock was prolific hitting three of his six attempts to finish the game with a game-high 20 points. But the former Los Angeles Lakers guard refused to take the credit for the win. "It is very important to win these types of games," said Goudelock. "Every win we get is another step for us toward the next round. We wanted to come in here and fight. They are a good offensive rebounding team, they play really hard. I think we did a good job in the second half."

Elsewhere Galatasaray fell 86-77 to Panathinaikos, one of the strongest teams in the competition. The loss gives the Greeks a 3-2 record while Gala drop to 2-3.Gala coach Ergin Ataman blamed the defeat on off performances by Carlos Arroyo and Zoran Erceg as well as a lack of confidence.; "It has been a very difficult and strange game, since our two best offensive players, Carlos Arroyo and Zoran Erceg, had their worst performances tonight. Especially in the first half, we saw our self-confidence going down, because we missed a lot of shots."