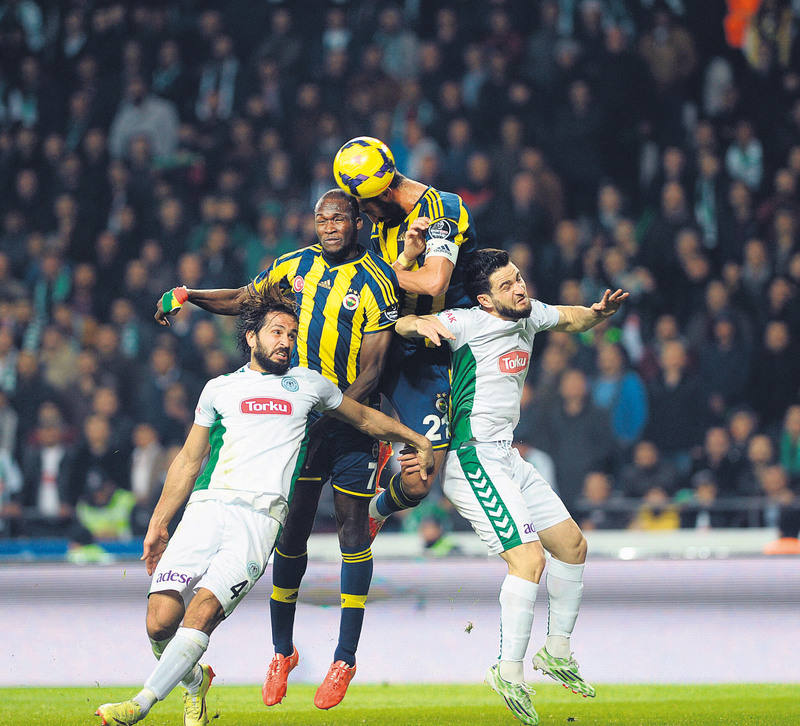 Goals and form are in short supply for the Yellow Canaries at the moment while manager Kartal blames poor fortune. The gap between Fener and leaders Galatasaray increased to four points ahead of the critical derby to be played next weekend

Fenerbahçe coach İsmail Kartal has put his side's recent poor form down to bad luck, claiming that his team have played well over the last three weeks despite dropping seven points. Turkish powerhouses Fenerbahçe missed out on two valuable points after they drew 1-1 with Torku Konyaspor in an away match on Saturday night. After dropping the points they were expected to win, the gap between Fener and leaders Galatasaray increased to four points ahead of the critical derby to be played next weekend.

Kartal backed his players' form and thinks that ahead of the derby next weekend, all his team needs is luck.

"Although we had many injured and suspended players, my players on the pitch did their best," said Kartal. "They put in a good performance. I congratulate my players. We have played well in the last few weeks but we can't win and I put it down to bad luck. We will prepare for the Gala match in the best possible way we can."

While the Yellow Canaries are locked in a fierce battle for the top spot in the Turkish league, coach İsmail Kartal did have some nice words for archrivals Galatasaray's coach Hamza Hamzaoğlu, who had said before the game that "If Fener get title, I'll applaud." Kartal said, "Hamza is my friend. If they get title I will applaud too."

Fenerbahçe are not enjoying a purple patch at the moment after dropping seven points during the last four weeks of the Turkish league. An interesting wrinkle in their stifled form is that Fener have given up points to their former coaches and players. In the 19th week, former Fenerbahçe coach Ersun Yanal's Trabzonspor drew with Fenerbahçe 0-0 on their home soil. Last week Roberto Carlos, a former Fenerbahçe player and Brazilian World Cup winner, challenged his former team. And Carlos' team Akhisar Belediyespor managed to take all three points from Fenerbahçe in Istanbul at the Şükrü Saraçoğlu stadium. And on Saturday Aykut Kocaman, who is a former striker and later coach of Fenerbahçe, dealt the side another blow. The Yellow Canaries have ended up handing over seven valuable points to their "old friends." Fenerbahçe now have 47 points but they fell behind by four points to archrivals Galatasaray

Konyaspor's May Mahlangu scored in the eighth minute to put Fener on the back foot early on. Fenerbahçe dominated the match after they conceded the goal but they could not change the scoreline in the first half

The second half started at a low tempo with neither side able to find a comfortable rhythm. But after Emre Belözoğlu took to the field, Fenerbahçe dominated again and with Emre's assist from the corner kick Emmanuel Emenike equalized scored in the 67th minute. Fenerbahçe's efforts were not enough to grab the valuable much-needed goal.

Fener's Senegalese striker Moussa Sow admitted his mistakes and said, "After the Gaziantepspor game, I, as a forward, have not found goals. Under the circumstances, we deserve to be criticized firstly. I'm a forward player and accept all the criticism directed at me. Only God knows how much we work. We'll do our best. Our fans please be rest assured"

An interesting chant could be heard during the Konya match. Konya fans cheered, "Rig Aziz Yıldırım, rig Aziz Yıldırım" reminding Fener of the 2011 match-fixing case against Chairman Aziz Yıldırım. But they forgot something. Their coach Aykut Kocaman was in charge when the match-fixing case had been opened. So Aykut Kocaman reacted to the cheering saying "The cheering caused suffering in me. The biggest problem of our people is that they like very much to cause suffering in other people. I say this not for only Konya people but also for everyone. The match-fixing allegations were false."
Last Update: Mar 02, 2015 10:16 am
RELATED TOPICS