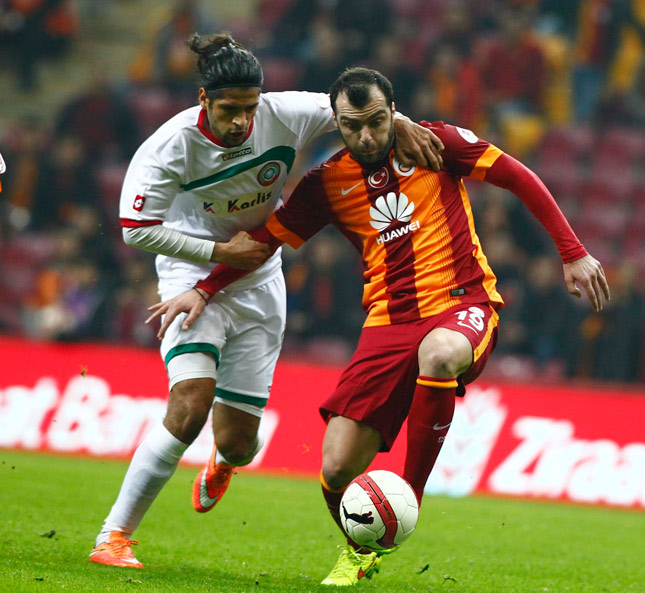 While Fenerbahçe and Beşiktaş lose ground at the top of the table, Galatasaray clinch the league lead after two consecutive wins

Galatasaray profited from their opponents' misfortune as they cemented their lead at the top of the table thanks to a 3-1 win this weekend while their rivals Beşiktaş and Fenerbahçe slipped up again.

Despite riding on a high following their midweek defeat of Liverpool in the Europa League, Beşiktaş could only draw 2-2 at home against Balıkesirspor on Sunday. The lost points by Beşiktaş and Fenerbahçe over the last two weeks has paved the way for Galatasaray to take charge of the Turkish Super League.

Galatasaray are now in the top spot thanks to a pair of victories in the last two weeks. After Fenerbahçe's surprising draw with Torku Konyaspor in an away match on Saturday, Balıkesirspor also shocked giants Beşiktaş in a 2-2 draw at Osmanlı Stadium in Ankara on Sunday.

As of matchday 22, Galatasaray are leading with 51 points. Beşiktaş are in second place after moving to 48 points following the draw in Ankara. Meanwhile Fenerbahçe are in third spot with 47 points.

Whether Gala will stay on top is another question all together, with the lead constantly switching throughout the season so far. Beşiktaş were the leading team in the fifth week of the season when they beat Balıkesirspor 1-0. In the eight week, Fenerbahçe, Beşiktaş's urstwhile rival, held the top spot. Fenerbahçe beat Beşiktaş 2-0 at the Atatürk Olympic Stadium and became the leader of the week.

In the 10th week, Beşiktaş won 2-0 over Kasımpaşa and Fenerbahçe drew 1-1 over Bursaspor. The rival teams took a joint lead in the league. Until the 16th week, Beşiktaş sustained their position at the top. However, in the 16th week, Beşiktaş lost 2-0 over Galatasaray at the Atatürk Olympic Stadium. Fenerbahçe took the top spot when it won 2-0 over Başakşehir. In the 19th week, Fenerbahçe drew 0-0 Trabzonspor during the home game. Beşiktaş won 2-1 over Çaykur Rizespor in the away game and increased their points tally to 44. Fenerbahçe's total was 43 and Beşiktaş surpassed their rival. Beşiktaş completed the 20th week as the leading team after they won 3-2 over Bursaspor in a heart-stopping game.

In the 21st week, Galatasaray were the lucky team. Beşiktaş lost 1-0 against Eskişehirspor in an away game while Fenerbahçe lost 2-1 over Akhisar Belediyespor at home. Galatasaray gained speed and became the leader in the league. Galatasaray won 3-2 over Sivasspor and increased their tally to 48. The team surpassed Beşiktaş by one point and Fenerbahçe by two points. Everything was on track for Galatasaray last week. The team won 3-1 over SAİ Erciyesspor and garnered their 10th victory in their last 12 games. Fenerbahçe drew 1-1 over Torku Konyaspor in an away game, while Beşiktaş and Balıkesirspor drew 2-2. The goal difference between Galatasaray and Beşiktaş increased to three. Galatasaray completed the last two weeks as leader. Next week, the title race could take another turn as Galatasaray take on Fenerbahçe in a much-anticipated derby. Encouraged by the recent good results, Galatasaray's young coach Hamza Hamzaoğlu said, "I want our successes to go down in history." Meanwhile Fenerbahçe have appealed to the Turkish FA to switch the Turkish Ziraat Cup's schedule. While Fenerbahçe will play on Wednesday, their rivals Galatasaray will play today. So Galatasaray will be more rested before the critical derby.

Elsewhere, Bursaspor came from behind to beat Mersin 2-1 at the Atatürk stadium and keep their chances of a top four finish alive. The Green Crocodiles got off to a disastrous start when goalkeeper Harun Tekin was sent off on 17 minutes for a challenge inside the box that resulted in a penalty. Mitrovic converted from the penalty spot to give Mersin the lead going into the half time break. Fernandao equalised from another spot kick on 60 minutes to score his 14th goal of the season. The Brazilian has now scored the joint highest number of Süper Lig goals alongside Demba Ba.

Başakşehir kept their 13th clean sheet in the Süper Lig this season following their 2-0 win over Akhisar. Only Bayern Munich, Juventus, Porto, Benfica and Braga have conceded fewer goals than Başakşehir in Europe's top-tier leagues this season. Başakşehir have now kept three clean sheets in their last five league games and remain in fourth place in the table.

Başakşehir close the Süper Lig round of 22 in fourth place and will take on 13th placed Konyaspor next weekend.

Rizespor beat Eskişehirspor 3-0 to end their 287 winless streak at the Yeni Rize stadium. The win was enough to take Rizespor out of the relegation zone into 15th place on 21 points. Eskişehirspor dropped into 14th place on 23 points following the loss.
Last Update: Mar 02, 2015 10:23 pm
RELATED TOPICS