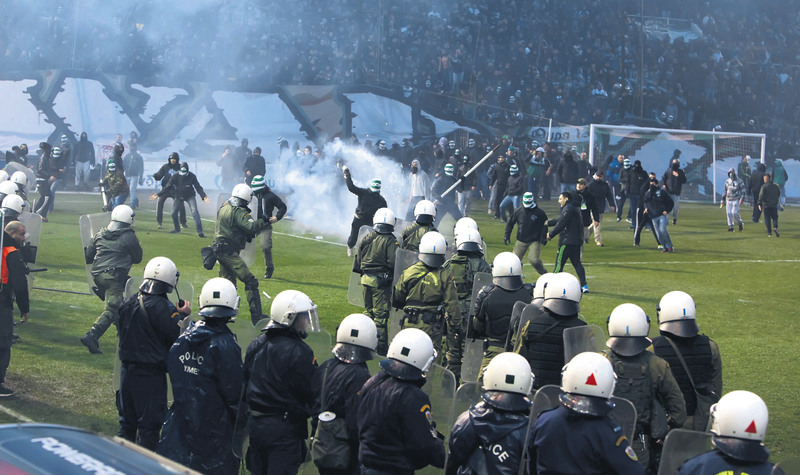 Greece may adopt the Turkish Passolig system. As a new e-ticketing system, Passolig ended the era of paper tickets at football games to allow for a safer atmosphere for all fans. Greece's top clubs have presented a plan that includes electronic tickets to abolish the one-week ban after crowd troubles

Football hooliganism has long been a problem in Turkey. To protect football games from violent fans, Passolig, a revolutionary seasonal pass that aims to end the era of paper tickets and create a safe atmosphere at football games was adopted in Turkey last year. The system was implemented on April 14, 2014. It is now only possible to enter the games with Passolig cards instead of paper tickets.

As a result, violence or hooliganism in the Turkish League has declined significantly this season. No act of violence in stadiums has been experienced in the Turkish leagues so far this season. Before the Passolig system, violent games used to happen frequently, especially in the games played among Turkish powerhouses Fenerbahçe, Galatasaray, Beşiktaş and Trabzonspor.

For example, at one match in March 2014 between Trabzonspor and Fenerbahçe, played in the Black Sea city of Trabzon, fans began showering the pitch with bricks and flares, prompting the referee to abandon the game after declaring the conditions unsafe.

Away fans were forbidden from attending derby matches between the big Istanbul teams. As a penalty for violence, the Turkish Football Federation has forced teams to play in empty stadiums, or distributed tickets to women and children for free. After these moves were taken, the preparation for the Passolig system began when the government passed a law aimed at combatting violence and disorder in sports in 2011.

Greece, which has experienced the same problem, is now considering carrying into action a new system similar to a Passolig. Greece's top flight clubs presented a blueprint for tackling violence to the Deputy Sports Minister Stavros Kontonis yesterday and ask for the season to restart after a one-week ban following crowd trouble in the Athens derby, according to Reuters.

Super League president Giorgos Borovilos said that the introduction of technology such as electronic tickets will be necessary for all clubs from next season in line with government demands. He added that some of the measures proposed included a total ban on away fans until the end of the season, stricter penalties for riots, greater authority for referees and stewards, and improved policing.

Panathinaikos's 2-1 derby win over Olympiakos Piraeus last month ended with a pitch invasion after flares were thrown onto the field at various times during the match, one of which hit the Olympiakos midfielder Pajtim Kasami on the arm.

That was followed two days later by a Super League board meeting that ended in a brawl, leading to the suspension of matches with Greece's recently elected Syriza ruling party aiming to stamp out the problem of crowd violence. It was the third time this season that professional football in Greece had been shut down.

"The main purpose of the [Passolig] system is to prevent spectators from entering stadiums who are [blacklisted] for sport-related offenses," says Kemal Hacıoğlu, the official coordinator of the e-ticketing system at Turkey's football federation, in an e-mailed response to questions.

"The law is aiming to establish a safe environment for the families and women who are expecting to have a good time in sport arenas."

"Some of the fans behave like maniacs. I have a wife and child and I would never want to take them to matches. The atmosphere isn't appropriate" he said.

Anyone wishing to attend a football match in Turkey's top two leagues must buy a Passolig credit card for between 15 and 20 Turkish Lira ($5.9-$7.8), which can then be used for purchases on an array of non-football related services, from retail shopping to public transportation.

In Turkey, some allege that the system may be used for surveillance and profiling of football fans. Dismissing such allegations, Özgur Gündoğan, Passolig's general manager, said, "If you use a credit card or a cell phone, then your mark is everywhere and traceable. There is no need Passolig for your information."

"People are complaining that the stadiums are empty, but actually our tax income has increased," he told reporters. "These kind of systems are popular all over the world. It's useful for dealing with underground ticket sales."