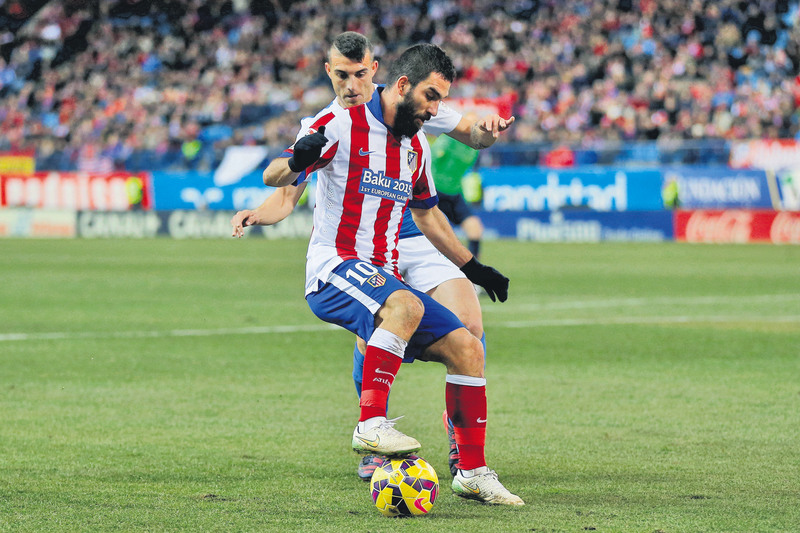 by daily sabah
Mar 06, 2015 12:00 am
Spanish team Atletico Madrid are reportedly prepared to sell Turkish star Arda Turan and Mario Mandzukic to fund a summer move for Paris Saint Germain star Edinson Cavani. The defending La Liga champions are hoping to take advantage of Cavani's close links with club captain Diego Godin to bring the Uruguayan to Madrid, according to reports in Spain. Cavani looks set to be at the heart of a massive transfer battle this summer with Starsport revealing earlier this month that Manchester United had made him a prime target, while Juventus are also interested. It is likely to take a bid in excess of 45 million pounds to prise the 28-year-old away from the Parc des Princes. And Spanish reports claim Atletico are willing to sell Mandzukic and Turan to make a move possible. Mandzukic has impressed since arriving from Bayern Munich last summer but Diego Simeone is reportedly happy for the forward to leave following Fernando Torres' arrival last month. The Croatian has been heavily linked with a move to Arsenal and Manchester City and would be available for around 32 million pounds. Simeone is also willing to let former Galatasary star Turan depart the Vicente Calderon. The Turkish star is said to be unhappy at Atletico and would bring in 20 million pounds to aid any bid for Cavani. Meanwhile, Atletico's coach Diego Simeone is stalling on a new contract at Atletico Madrid, in the hope of getting the Manchester City job - that's according to the Daily Mirror. The 44-year-old has been offered an extension until 2022 by Atletico after establishing himself as one of the best young coaches in world football. But despite holding talks with the Spanish champions, Simeone has reportedly not signed because he fancies the City job and is prepared to wait until the summer to see what unfolds there. The paper reports that Simeone, Real Madrid boss Carlo Ancelotti and Bayern Munich's Pep Guardiola are seen as potential replacements for under fire current boss Manuel Pellegrini.
Last Update: Mar 06, 2015 2:19 am