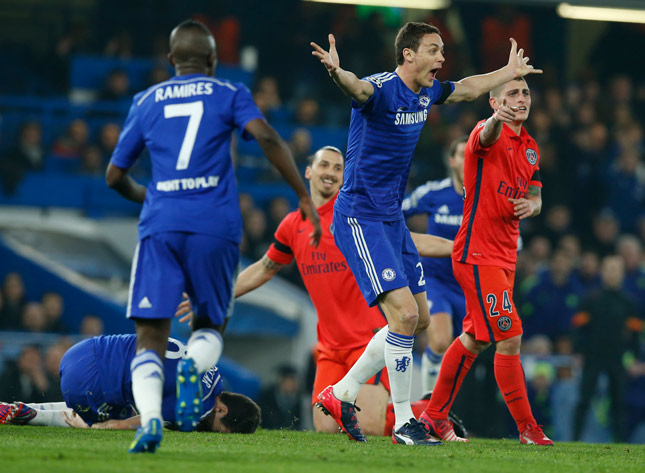 by Compiled from Wire Services Mar 13, 2015 12:00 am
Ten-man Paris Saint-Germain sensationally came from behind twice to dump Chelsea out of the Champions League on away goals after extra time Wednesday as Bayern Munich also qualified for the quarter-finals with a 7-0 rout of ten-man Shakhtar Donetsk. Paris Saint-Germain striker Zlatan Ibrahimovic accused Chelsea's players of acting like "babies" after he was sent off during his side's triumphant draw at Stamford Bridge in the Champions League. Ibrahimovic was shown a straight red card by Dutch referee Bjorn Kuipers in the 32nd minute of Wednesday's game following a 50-50 challenge with Oscar, despite the fact that both players had seemed equally committed to the tackle. Kuipers was quickly surrounding by Chelsea players in the immediate aftermath of the incident and Ibrahimovic expressed irritation with their behaviour. "I don't know if I have to get angry or start to laugh," he told reporters at Stamford Bridge. "For me, when I saw the red card I was like, 'The guy doesn't know what he's doing.' "That is not the worst. The worst is when I got the red card, all the Chelsea players come around. It felt like I had a lot of babies around me." Despite Ibrahimovic's dismissal, PSG twice came from behind to force a 2-2 extra-time draw that took the French champions into the quarter-finals on away goals after a 3-3 aggregate draw. "It was an amazing performance because we were playing with one less (player)," Ibrahimovic added. "They played with big hearts. It's not easy to play with 10 guys, especially against a team like Chelsea. We showed quality and big heart." PSG coach Laurent Blanc coach suggested after the game that his club would ask European governing body UEFA to review Ibrahimovic's dismissal. British newspapers and pundits rounded on Chelsea and manager Jose Mourinho yesterday following their Champions League elimination, branding them "a team who will never really be loved".