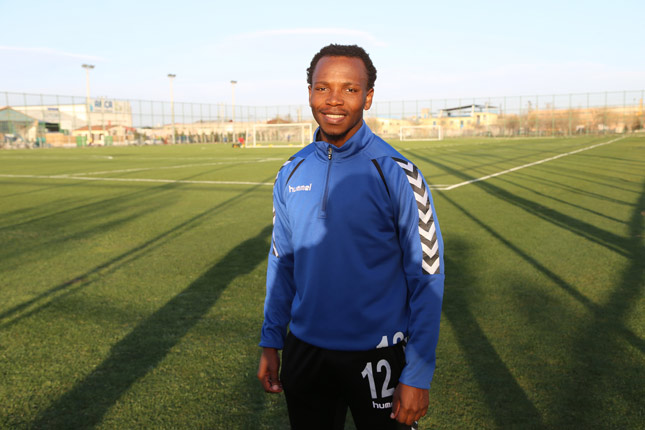 by Anadolu Agency Mar 13, 2015 12:00 am
A South African footballer playing in Turkey's top-flight football league has said he is thinking of converting to Islam. Torku Konyaspor's mid-season transfer, South African May Mahlangu, spoke to Anadolu Agency about his career, family and faith. Having started his football career in the Stars of Africa Academy in 2004, the 25-year-old central midfielder said: "My father was a Muslim and my mother was a Christian. I went to mosque with my father and went to church with my mother. There were so many people around me from both religions and I grew up with them. So, I am half-Muslim and half-Christian. After arriving in Turkey, I interacted with Muslims more. I am interested in Islam so much and I get along with my Muslim friends here, so I think about becoming a Muslim." Mahlangu said the Turkish league is difficult and is of higher quality than other competitions in Europe. "The league is appropriate for developing. Besides, there are many good players from around the world [here]. Emmanuel Emenike, Wesley Sneijder, Moussa Sow and Demba Ba are playing in Turkey. That's why the Spor Toto Super League is high quality," he stressed. He also added that the Super League is physically and technically superior to other competitions he previously played in. Mahlangu said he had no favorite for this year's title challenge with Fenerbahçe, Beşiktaş and Galatasaray, as each have an equal chance of claiming the top spot. Having played for Alexandra United in South Africa from 2006 to 2008, he transferred to Sweden's IF Helsingborg. Mahlangu went to another Swedish club, Hassleholm, on loan where he scored seven goals in 98 matches there. Last season, Mahlangu competed for Swedish Super League team IFK Goteborg where he found the net six times in 24 league appearances.