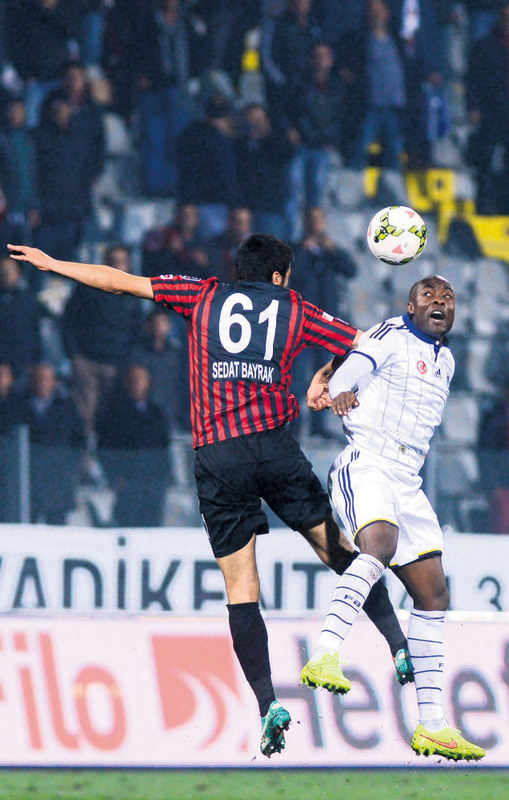 While Fenerbahçe were stunned by Gençlerbirliği, Beşiktaş managed to go four points clear of Fenerbahçe. The Yellow Canaries have no other solution but to defeat Super League leaders Beşiktaş next weekend to get back into the title race

Turkey's Super League has seen a flow of interesting results from the league's giants over the last two weeks. Last week, Fenerbahçe had to defeat their main rivals Galatasaray on their home soil, Şükrü Saraçoğlu stadium, knowing that if they had lost the derby, the point gap would have become seven points. After they beat Galatasaray 1-0, Fenerbahçe breathed a sigh of relief and closed the gap. However, the nightmare scenario came on Sunday. As Galatasaray drew with Istanbul Başakşehir on Saturday, Fenerbahçe had a big opportunity in the title race. However, the Yellow Canaries again lost three precious points against Gençlerbirliği at the Ankara 19 Mayıs Stadium in the league match on Sunday night.

As a result, they now need to win another derby and close the four-point gap with Beşiktaş. The loss in Ankara only adds to the pressure for Fenerbahçe before the derby against rivals Beşiktaş next weekend. Beşiktaş raised their points total to 54, taking the number one spot in the table. They are followed by Galatasaray, who have 52 points, while Fenerbahçe are in third with 50 points.

On Sunday, hosts Gençlerbirliği took the lead against Fenerbahçe when their Serbian defensive midfielder Radosav Petrovic's thunderbolt flew into the net in the 37th minute. In the 72nd minute, Fenerbahçe equalized after the Yellow Canaries' Turkish defensive midfielder Mehmet Topal converted a close-range header. Caner Erkin produced the assist. Genclerbirliği scored the winning goal near the end of the game when Moroccan forward Moestafa El Kabir found the net with a header, assisted by a mistimed effort by Fenerbahçe goalkeeper Volkan Demirel.

Fenerbahçe's head coach İsmail Kartal said that there was no excuse for the defeat against Gençlerbirliği. He said, "We actually made a good start. We found several positions in the first 20-25 minutes. But our rivals balanced the game. We conceded a goal at a time we did not expect. They made a good start in the second half. We tried to dominate the game. We found positions with Pierre Webo, Emmanuel Emenike and others but could not score. We absolutely want to win the weekend derby with Beşiktaş."

Gençlerbirliği's coach Mesut Bakkal is famous for defeating Turkey's four big teams. Teams managed by him have gained a number of notable wins against the big four.

On whether the Galatasaray win affected the game against Gençlerbirliği, Kartal said, "We can't say it like that. Heavy rain and a distorted pitch affected our playing system. We could not play the way we planned. Yet, we don't have any excuse. We must forget and win the next match against Beşiktaş." The victory takes the Ankara-based side up to eighth place with 32 points in 24 games.

While, Beşiktaş have moved into first place in the Turkish Super League with a 5-1 victory over relegation strugglers Kayseri Erciyesspor, Demba Ba has become Beşiktaş's highest-scoring foreign player with 24 goals. Ba has scored the most goals in a season for Beşiktaş as a foreign player. He has scored 15 goals in Super League in 24 weeks. Ba also revealed that he would be happy to return to the Senegal national team now that head coach Alain Giresse has left. "I spoke to Aliou Cisse and I made it clear that my absence from the national team was not a self-imposed exile," Ba was quoted as saying by the BBC.

"I cannot reveal what was discussed but it was very encouraging and he was happy to know I am available for selection." Ba has four in 21 international game for the Senegal national team since making his debut in 2007.

Elsewhere, Eskişehirspor recorded an important home victory against Mersin İdman Yurdu in the 24th week of the Turkish Super League. Sezer Öztürk and Ömer Şişmanoglu found the back of the net for the home side. The away side Mersin have now lost three games in a row and will remain in seventh place. Eskişehirspor have moved up to 13th place with 27 points in 24 games.
Last Update: Mar 17, 2015 10:01 am
RELATED TOPICS