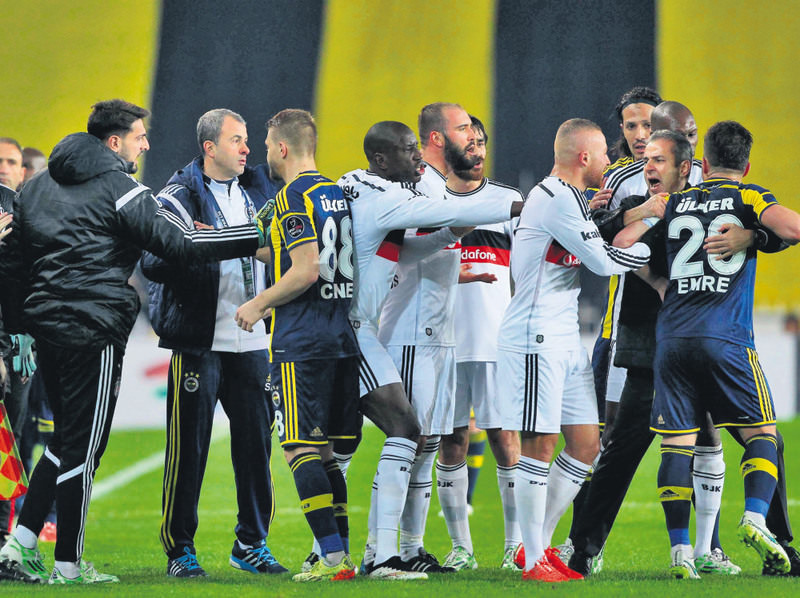 by Arda Alan Işık Mar 24, 2015 12:00 am
"We do not want to watch fighting, we want football." These words belong to a Spanish commentator, who was commenting on the Fenerbahçe-Galatasaray derby in 2009. What made him say these words was a shameful fight that included almost every player and lasted for almost half an hour. Furthermore, when Spanish TV understood that the fight was not going to end any time soon, they stopped their broadcasting. The "biggest" derby in Turkey was not even worth watching.

Today, the situation is pretty much the same. The ones who can't play, fight. Although, the brutal game play has always been the most crucial element of Turkish football, brutality sees its end point in the derby games. The pressure of artificial expectations and fueled agitation makes coaches and players unable to think, and when they lose the football logic they have, violence becomes the only option.

What we observed in the Fenerbahçe-Beşiktaş game was an exact copy of this formula. The game, which was supposed to be joyful, became a burden for everyone who was involved in the game. The atmosphere in the stadium was so tense and result-orientated that Emmanuel Emenike withdrew from the game because of the unbearable pressure concentrated on him. Nevertheless, most people chose to blame Emenike for his decision and overlooked the violent environment surrounding him. Yes, he is a professional and he is paid to stay on the pitch, but one has to be senseless to deny the destructive effect of being psychologically lynched by 50,000 people. Added to that, when you blame Emenike, you justify the use of violence in order to get good results. Just like in Beşiktaş goalkeeper Tolga Zengin's case, fans somehow think they have the right to lynch any person on the pitch. Therefore, I have the right to say fans are not present in the stadium for the sake of football, they are just satisfying their ego.

However, except cases like Emmanuel Emenike's, in which a player reacts to the fans, most of the time players and coaches immediately execute the demands of those in the stadium. As in the case of Emre Belözoğlu, some players even deliberately create conflict on the pitch. This tactic serves the big guns of Turkish football really well. Whenever they need to score, but they cannot create a chance through actually playing football, somehow a chaotic situation can rescue them. Even some elderly football columnists still praise the "aggressive" style of these so-called senior players. Nevertheless, it is just an ugly compensation for not knowing how to play football as a team.

Thus, there was nothing worth examining in the derby in terms of football. As the years go by, Turkish football is becoming more domestic and isolated because of the tyranny of violence. As long as we forget and celebrate, more Emenike's will leave and more Belözoğlu's will come.

Although, he has been exposed to extreme pressure from the fans, Tolga Zengin is pushing his luck more than he should be. He was always a physically problematic player, but the more worrying point is that he mentally contributes to the situation. It is painful to watch him getting injured after every save or punching the crossbars. He should act like a true professional and play football when he is both physically and mentally ready. Otherwise, it is also unfair to other goalkeepers. On the other hand, Volkan Demirel has some mental issues too. His concentration has been really low in the last few games and he is making amateur mistakes. Most of the time in the derby, he couldn't communicate with his team-mates and hesitated a lot. Finally, the third goalkeeper in the game, Günay Güvenç put in a decent performance but he had nothing to do. However, it is still very early to speak about him.
Last Update: Mar 24, 2015 1:53 am
RELATED TOPICS