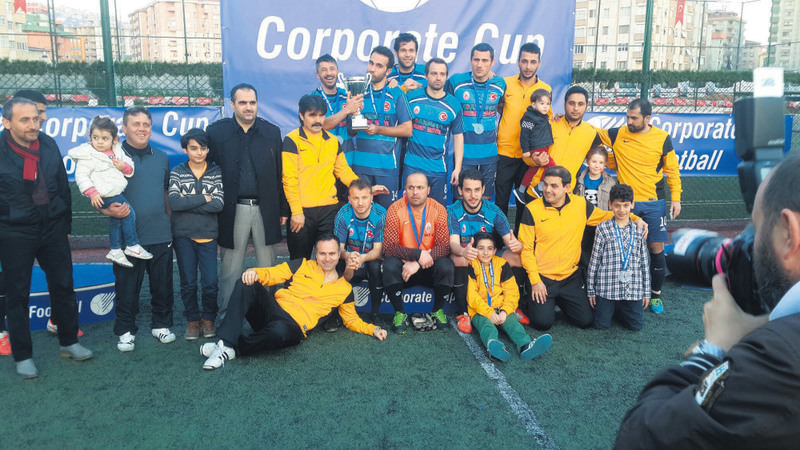 by Hakan Baş Apr 09, 2015 12:00 am
The İETT (İstanbul Electric Tram and Tunnel Company) football team, for whom President Recep Tayyip Erdoğan once played, became champion in the Turkish leg of the World Corporate Cup of Football, the biggest inter-corporate sports festival in Turkey. This year, the tournament, which was first organized in 1999, took place at the Ayışığı Facilities in the Maltepe district of Istanbul. Thanks to their success in this year's tournament, the İETT football team will represent Turkey at the World Corporate Cup of Football in the U.K. between May 29 and May 31. Last year, the tournament took place at Liverpool's Anfield Stadium and the İETT football team was crowned as champion. While the Tepe Construction Team claimed second place, the Islamic Development Bank (IDB), which brings an international color to the tournament, claimed third place in the Turkey leg of the organization.

These teams will represent Turkey in the football branch of the 13th Corporate Games on May 22, 23 and 24 in Istanbul. Every year, the World Corporate Cup attracts corporate companies from all over the world, making new rivalries each year. Many companies from different sectors, from banking to medicine, food to agriculture, automotive to tourism and education to informatics, compete with each other to become a part of the world cup held in the U.K. Since 2003, over 1,000 companies have participated in the Istanbul Corporate Games.

Corporate employees try to overcome each other in basketball, bocce, mountain cycling, dragon boat, gold, carting, table tennis, beach volleyball, tennis, volleyball, swimming, bowling, football, running, sailing and chess at one of the most comprehensive inter-corporate tournament in the world.

With the club moving to the Olympic Stadium next year, this tournament represents one of the last opportunities available to play on the famous pitch graced by the legendary Geoff Hurst, Martin Peters and Bobby Moore, former World Cup winners with England in 1966.

The cup gives players of all abilities, ages and genders the opportunity to sample everything that one of the world's best known football clubs can offer, whilst playing 11 or 6 a-side football with your colleagues and team-mates in the historic heart of the Premier League.
Last Update: Apr 09, 2015 7:39 pm
RELATED TOPICS