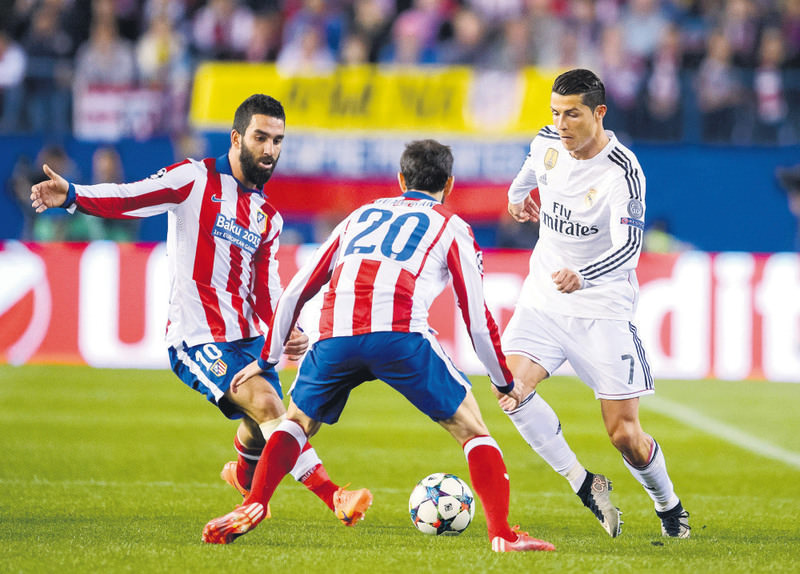 by Apr 15, 2015 12:00 am
Atletico Madrid and Real Madrid will fight it out for a place in the Champions League semi-finals next week after the two couldn't be separated in a feisty 0-0 first-leg draw at the Vicente Calderon on Tuesday. The visitors had by far the better of the chances, particularly in the first period, and Atletico were grateful to goalkeeper Jan Oblak for keeping them in the tie with a string of fine saves. Tempers flared after the break as Madrid defender Dani Carvajal escaped unpunished after punching Mario Mandzukic inside the penalty area.

However, for the fourth time this season Real failed to score at the Calderon as Atletico extended their unbeaten run in the Madrid derby this season to seven games. And the sides meet for the eighth time at the Santiago Bernabeu on April 22. "Obviously you always want to score and win, but it is important not to have not conceded at home," Oblak told Television Espanola. "I don't know (who is the favourite now). Madrid have a great team with a lot of great players so we will see what happens in the return leg." Real boss Carlo Ancelotti, meanwhile, was left to lament his side not killing the tie off before half-time. "I think that in the first-half we deserved more than to be 0-0 at half-time. We need to highlight the performance in the first-half which was fantastic. "In the second-half, Atletico pressured more and the game was more even. "It isn't a brilliant result but we have confidence for the return leg, especially based on the first-half performance."

Atletico coach Diego Simeone kept faith with Oblak in goal ahead of the fit again Miguel Angel Moya and that decision paid dividends after just four minutes when Gareth Bale pounced on an uncharacteristic error from Diego Godin, but placed his shot too close to the on-rushing Slovenian, who spread himself well to make the save. "The tie is still open," said Simeone. "In the first half the opponents were good. Oblak was great, especially in the chance for Bale which was the clearest opportunity. "The best thing was the reaction we had. Any other team that had been damaged as we were in the first half would have ended up relenting, but in the second-half the game became much closer to what we had imagined at the start."
Last Update: Apr 15, 2015 10:46 pm
RELATED TOPICS