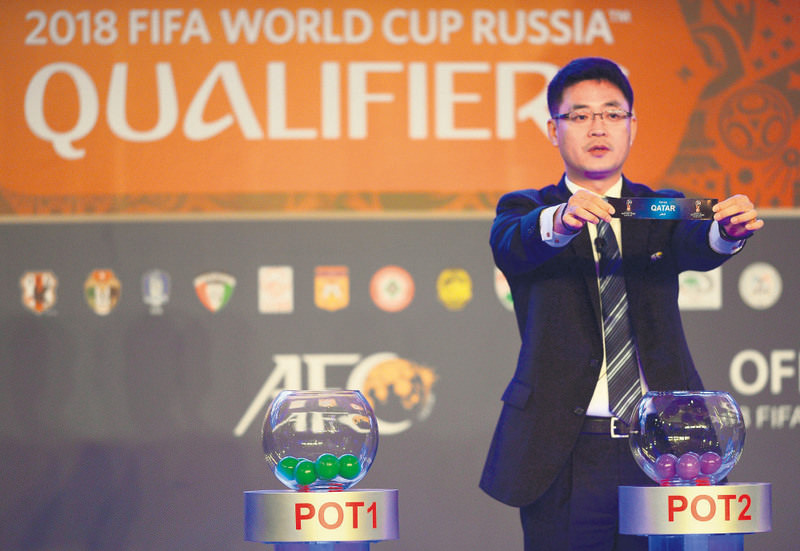 by French Press Agency - AFP Apr 15, 2015 12:00 am
Qatar received a difficult draw for the 2018 World Cup as they embark on their final attempt to qualify for the tournament before hosting it in 2022. The Gulf state were bracketed with rapidly emerging China, who impressed at this year's Asian Cup, and will also face tricky trips to Hong Kong and Bhutan. Qatar have never reached the World Cup and an appearance at Russia 2018 would help assuage critics who question their credentials as hosts of football's biggest competition. The reigning Gulf champions disappointingly failed to reach the Asian Cup knock-out stages in January and they will be keen to show their worth in international competition. Alain Perrin's China are seeded top in Group C and Bhutan created headlines when, as the world's lowest ranked team, they shocked Sri Lanka to reach the second qualifying round.

Asian Cup-winners Australia face a challenge from Jordan in Group B, while Japan received a kind draw with Syria, Afghanistan, Singapore and Cambodia in Group E. North Korea, who reached the 2010 World Cup, could spring a surprise in Group H, where Uzbekistan, Bahrain and the Philippines are seeded above them. The top eight teams and four best group runners-up will progress to Asia's final World Cup qualifying round, as well as the 2019 Asian Cup in the United Arab Emirates. The remaining 28 teams will compete for the other 12 places at the Asian Cup, which has been expanded to 24 sides for 2019.The home-and-away round robin starts on June 11 and finishes on March 29 next year.
Last Update: Apr 15, 2015 10:55 pm
RELATED TOPICS