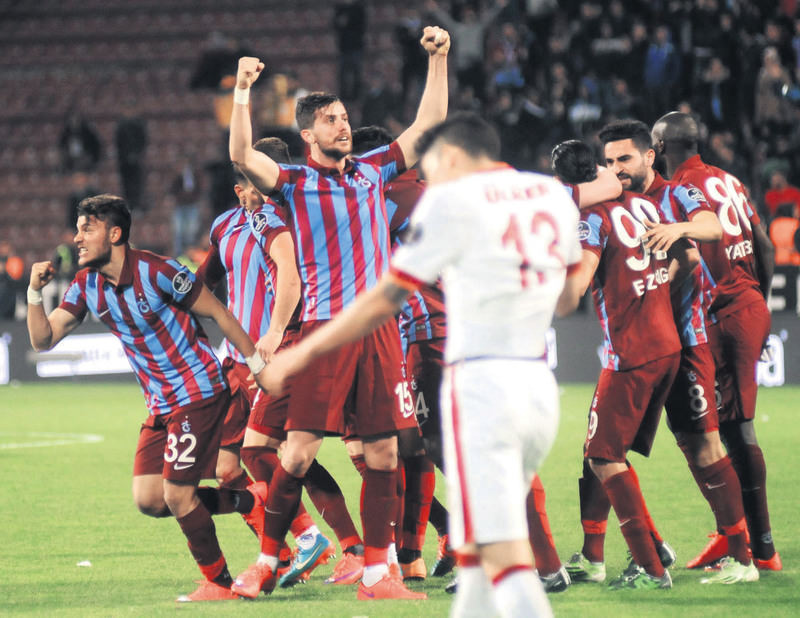 Trabzonspor beat Galatasaray 2-1 in the Spor Toto Super League at the Hüseyin Avni Aker Stadium in Trabzon on Sunday in a win marred by a mass brawl toward the end of the game. Trabzonspor made a flying start in the match and dominated the first 20 minutes. They took the lead when their Turkish midfielder Özer Hurmacı tapped the ball into the net from close range to make it 1-0. Galatasaray midfielder Hamit Altıntop left the pitch because of injury in the 33rd minute with Emre Çolak being subbed in in his place. Çolak made an instant impact with his shot rattling off the crossbar in the 43rd minute but the visitors failed to find the back of the net in the first half. In the 67th minute though, Çolak scored the equalizer with a classy finish inside the penalty box, to make it 1-1, with Wesley Sneijder producing the assist. Galatasaray dominated the second half; however, Trabzonspor took the lead in the 85th minute once again. Algerian center-back Carl Medjani scored the winning goal with a close range tap in. The goal sealed the victory for Trabzonspor, leaving the title race between Beşiktaş, Galatasaray and Fenerbahçe neck and neck.

Near the end of the game, a brawl between the players took place on the pitch, which resulted in Trabzonspor midfielder Özer Hurmacı being sent off from the bench. On Saturday, Beşiktaş eased past Kasımpaşa 5-1. Mustafa Pektemek, Demba Ba, Ramon Motta, Olcay Şahan and Jose Sosa were the scorers for Beşiktaş.

Trabzonspor have broken new ground, going unbeaten against both Fenerbahçe and Galatasaray in the same season for the first time in 28 years.

However, Trabzonspor may have to play against Beşiktaş without spectators because of abuse meated out to the referee. The referee was attacked by a lighter thrown from the stands.

Trabzonspor coach Ersun Yanal has set his eyes on Beşiktaş and Bursaspor in forthcoming fixtures. Speaking to Lig TV after the match, he said, "We have been through a period in which we can't get points in our away matches. We can't find the motivation on our home soil. We wanted to win more than our rivals and so we won. But in the second half, we gave the control of the middle of the pitch to our rivals. We could not make effective counter-attacks."

"Now, we want to beat Beşiktaş and Bursaspor too. If we can do it, we will climb to the upper ranks of the Super League."

Carl Medjani, who found the net in the win in the first half of the season, repeated his success on Sunday. He has scored three goals against Galatasaray in total this season. "We are happy to get a good result. I hope we gave a good present to Trabzonspor fans with this win. I dedicate my goals to them."

Galatasaray coach Hamza Hamzaoğlu said, "We were near to winning but we lost. We could not start well. We especially did not play well in defense. But we started well in the first half and we were the one who desired to score more. However, while we were seeking to find the goal, we conceded. But it's not the end of the world. We have seven matches to play. We lost three points but I congratulate my players for their fighting spirit.

"What's important is to become leaders in the last match of the season. Our rivals may lose while we win. We must continue the winning ways to the very end of the season."
Last Update: Apr 20, 2015 11:23 pm
RELATED TOPICS