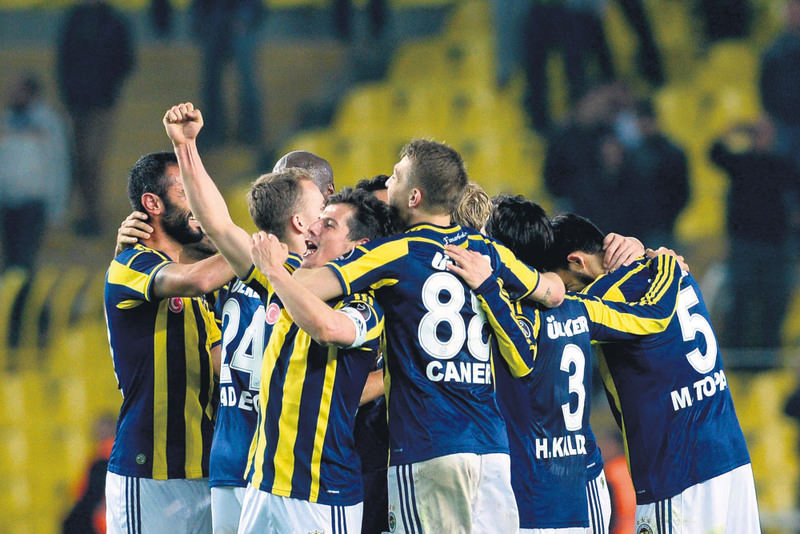 by Hakan Baş Apr 21, 2015 12:00 am
Following Galatasaray's defeat against Trabzonspor, Fenerbahçe took over the leadership position in the Spor Toto Super Lig after winning against Bursaspor 1-0. The Yellow Canaries made a happy habit of finding the net in the last 10 minutes of the last three games, and Monday night was no exception as Pierre Webo grabbed the only goal of the game with six minutes to go.

The Fenerbahçe community have been tasting nothing but glory this week. Celebrating their success in the EuroLeague, where they advanced to the Final Four for the first time in their history, Fenerbahçe fans have been able to toast similar success in the domestic football league. Beating the Anatolian powerhouse Bursaspor 1-0, thanks to Webo's goal, Fenerbahçe have taken over the leadership from their archrivals Galatasaray and gained an advantage in their hunt for their 20th title and fourth star. They have been winning as a result of goals scored in the last 10 minutes for three matches while Monday's result would appear to demonstrate that Fenerbahçe haven't been adversely affected by the shock they experienced after the gun attack on their team bus two weeks ago. Bursaspor were looking to win to move up to fourth in the league and participate in the UEFA Europa League next season. However, Webo's goal cut the Gordion knot and their dreams had to be postponed. Speaking to Lig TV after the match, Webo said, "I am a team player. Whether I play or not, I am trying to be of help. I think we got three point thanks to our fans' great support."

Fenerbahçe coach İsmail Kartal credited the team's victory to the judicious use of Webo, claiming that because the player "is not that young," the club have had to limit his minutes allowing him to have more energy late on in games.

Kartal said, "We won by playing the way we should have played. We did not prefer more open football although we needed desperately to win to take the top spot. We found positions in the second half as a result of tactical substitutions. However we could not find the net. But we also did not give opportunities to our rivals. We are going on our way.

"I put Webo on the pitch in the late stages of the matches before. Maybe if he had not taken to the field in the late stages, he could not have scored those goals. He is not that young. We have achieved this performance by using him economically."

Bursaspor coach Şenol Güneş made harsh statements after the match. He alleged that the spectators affected the game and put pressure on the referees, leading them to make misjudgements. He said, "We are not used to playing tricks. The performance given by my team met my expectatations, but not the result. The Fenerbahçe fans put pressure on the referees and caused them to misjudge. We saw that rules are not eligible on the pitch. Our penalty was not awarded as a result and my players were shown unfair cards. I understand their fury but we conceded a bad goal and we should not have conceded such a goal."