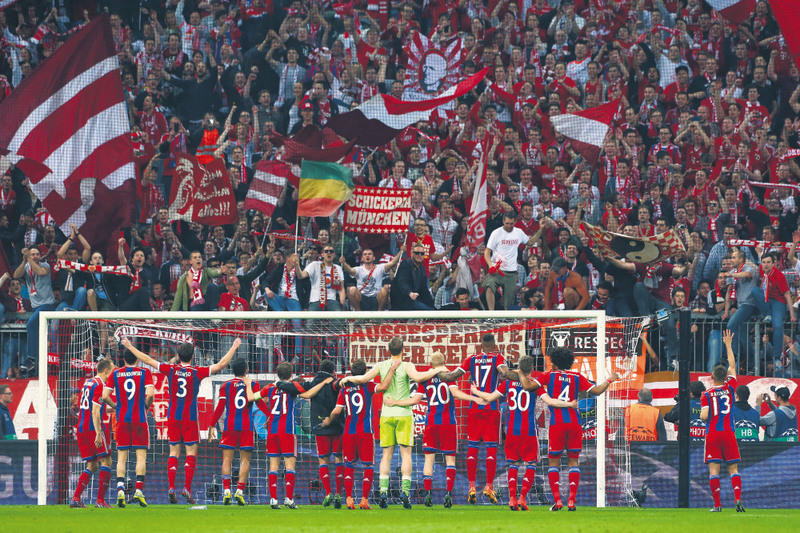 by French Press Agency - AFP Apr 22, 2015 12:00 am
Bayern Munich have been flooded with ticket requests for their home Champions League semi-final after their historic 6-1 drubbing of Porto, which saw Pep Guardiola's trousers rip in celebration. Guardiola's sideline jubilation after one of Bayern's five first-half goals in Munich on Tuesday led to the dapper Spaniard's tailored suit ripping on his left leg in what German daily Bild has dubbed a "Goal-gasum" ("Tor-gasum" in German). "Ah, they broke. It's not so bad, I'll just put on a new pair for the next game," grinned the Spaniard, who later quipped his partly exposed leg was "hot and certainly not cold" during the match. Bayern reached the Champions League semi-finals for the fourth year in succession after overturning a two-goal deficit from last Wednesday's 3-1 first-leg defeat at Porto to run out 7-4 winners in the quarter-final tie. It was the first time in Bayern's history that the team has progressed in Europe despite a two-goal deficit and it was the first Champions League knockout stage match to see one side score five first-half goals.

Guardiola's Bavarians produced a breathtaking opening 40 minutes to race into a 5-0 lead as Poland striker Robert Lewandowski scored twice. "Many people thought we couldn't do it, but we are FC Bayern Munich," said Lewandowski, who now has 22 goals this season. "We knew we had to step on the gas, but to go five goals up at half-time is really crazy." Munich's Allianz Arena has a capacity of 70,000 for European matches. But some 271,000 requests for semi-final tickets have already been received from Bayern members alone ahead of Friday's draw for the last four with the semi-finals to be held on May 5-6 and 12-13.

The match also claimed a German television record as 11.23 million viewers tuned into state broadcaster ZDF to watch, which was just over a third of the entire TV audience.

Bayern's victory was all the more impressive as it came without injured wingers Franck Ribery and Arjen Robben, while Germany captain Bastian Schweinsteiger spent the game on the bench.

The Bavarians can claim their first silverware of the season on Saturday if they beat Hertha Berlin at home and other results go their way in Germany's Bundesliga. Guardiola's side are still in the running to repeat their 2013 treble of Champions League, German league and cup titles and face Borussia Dortmund at home in the German Cup semi-finals.

This will be the sixth time in succession Guardiola has coached a team to the last four in Europe after four times with Barcelona and now twice with Bayern, who he joined in June 2013.
Last Update: Apr 24, 2015 1:14 am
RELATED TOPICS