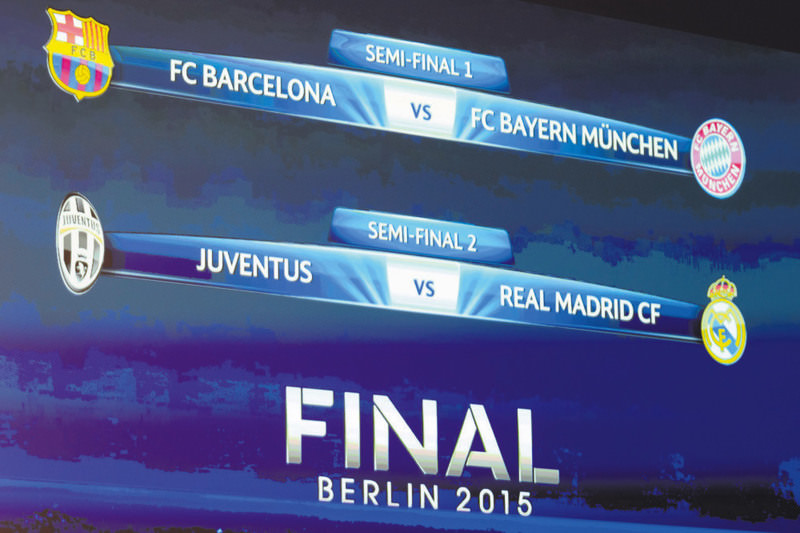 by reuters Apr 24, 2015 12:00 am
Barcelona will have the chance to avenge their 2013 humbling by Bayern Munich after being paired with the Germans again in the Champions League semi-final draw on Friday which also pitted holders Real Madrid against Juventus. Bayern thrashed Barcelona 7-0 on aggregate two years ago before going on to beat Borussia Dortmund to win their fifth European Cup.

Former Barca coach Pep Guardiola was on a year's sabbatical at the time but will doubtless enjoy the challenge of trying to repeat that achievement on his first return to the Nou Camp since taking over at Bayern.

Bayern, who play the second leg at home, will go into the tie on a high after their 6-1 quarter-final second-leg demolition of Porto but Barcelona were similarly impressive in dispatching a powerful Paris St Germain side 5-1 on aggregate.

"On Tuesday we played one of the best halfs in the history of the Champions League (when they scored five against Porto to wipe out a 3-1 first-leg deficit)," said Paul Breitner, Bayern's representative at the draw. "We have to do that over the entire two games against Barcelona."

Jordi Mestre, Barcelona vice-president, said: "Guardiola obviously knows us well but we also know him and his way of playing, while Luis Enrique and Guardiola know each other very well and it is another element to the game."

Real, seeking a record-extending 11th title, will be at home in the second leg against a Juventus side making their first appearance in the semis since 2003 when they beat the Spaniards en route to losing the final to AC Milan on penalties.

Juventus are flying on all fronts as they are firmly on course to win the Serie A title and have reached the Italian Cup final. "It will be a very tough semi," former Real striker and current club ambassador Emilio Butragueno said of the repeat of the 1998 final in Amsterdam which Real won 1-0. "Congratulations to Juventus and it will be an honour for Madrid as well. If we get some players back from injury it will be better but it will be a tough semi-final nevertheless." The semi-finals will take place on May 5/6 and 12/13 with the final in Berlin on June 6. mEANWHİLE, Holders Sevilla have been drawn at home to Fiorentina in the semi-finals of the Europa League on Friday, with Napoli meeting Dnipro Dnipropetrovsk in the other tie in Europa League.
Last Update: Apr 24, 2015 11:34 pm
RELATED TOPICS