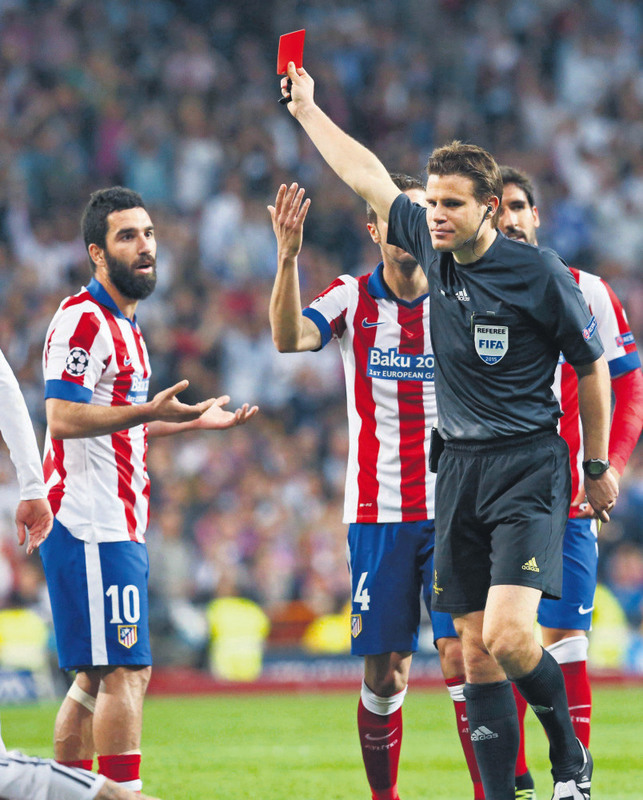 While Real Madrid edged city rivals Atletico 1-0 thanks to an 88th-minute winner from Hernandez, Atletico had to play the final 14 minutes with 10 men as Arda Turan was shown a red card. But Atletico's coach said: ‘There is no point in expressing an opinion about Arda's sending-off because it won't change the result'

Defending champions Real Madrid and Juventus scraped into the Champions League semi-finals, joining already qualified Bayern Munich and Barcelona on Wednesday. Real edged city rivals Atletico 1-0 thanks to an 88th-minute winner from on-loan striker Javier Hernandez after a goalless first leg. Juventus also made it to the last-four after a 0-0 draw in Monaco allowed them to qualify courtesy of their 1-0 first leg win in Italy last week.

Bayern and Barcelona had made sure of their places on Tuesday leaving Friday's semi-final draw to feature four teams with 21 European Cup triumphs between them.

The tie in Madrid was a repeat of last season's final, won by Real 4-1 after extra-time, but Atletico had gone unbeaten in seven previous meetings against their city rivals this season.

However, the visitors had to play the final 14 minutes with 10 men as Arda Turan was shown a second yellow card for a high challenge on Sergio Ramos. Hernandez then finally got the all-important goal after brilliant work from James Rodriguez and Cristiano Ronaldo left the Mexican (on loan from Manchester United) with the simplest of finishes from close range.

However, Atletico Madrid coach Diego Simeone was proud of his team and said they were exiting the Champions League with heads held high after elimination by holders Real Madrid. "I leave feeling proud of my team," Simeone, who has transformed Atletico into a side capable of challenging their wealthier neighbors, said at a news conference. "Again we competed superbly in a competition as tough as the Champions League and to be among the eight best teams in Europe is not easy," added the Argentine. "I was always taught that in the game you have to compete and if you give your all, you will go home feeling content. I don't have any negative feelings. There are coaches who would be envious to have these players."

Simeone refused to criticize the referee for Arda's dismissal, though he did say the game was going according to plan until the Turkey playmaker was punished for a foot-up challenge on Sergio Ramos. "There is no point in expressing an opinion about Arda's sending-off because it won't change the result," he said. Atletico must now regroup for the final six games of the La Liga season and focus on securing a Champions League place again.

They are third in the standings with 69 points, four ahead of fourth-placed Valencia, which would earn a place in the group stage.

Elsewhere, Juventus made the last four of the Champions League for the first time since 2003 after a goalless draw in their quarter-final, second leg with Monaco saw them progress 1-0 on aggregate. A controversial Arturo Vidal penalty in the first leg in Turin last week ultimately proved enough for the Serie A leaders, who relied on their defensive strength to see off opponents again let down by their lack of quality in the final third.

A Monaco side full of youthful enthusiasm pushed forward for long spells, but Juventus - who had let in just one goal in their previous nine matches - always looked in control and veteran keeper Gianluigi Buffon was never seriously threatened.

On Tuesday, doubles from Robert Lewandowski and Neymar inspired Bayern Munich and Barcelona into the semi-finals. Lewandowski's brace came in a crazy first half where Bayern rattled five goals past a demoralized Porto side - who had gone into the game leading 3-1 after the first leg and with real hopes of reaching their first semi-final since they won the trophy in 2004. The game ended 6-1 and a 7-4 aggregate victory for Bayern, extending coach Pep Guardiola's remarkable record in the competition where he has never failed to reach the last four.

Neymar also scored his double in the first half for Guardiola's former side Barcelona as they eased to a 2-0 win on the night and a 5-1 aggregate win over French champions Paris Saint Germain. While Barcelona reached their seventh semi-final in eight seasons, for PSG it was their third successive exit at this stage.
RELATED TOPICS