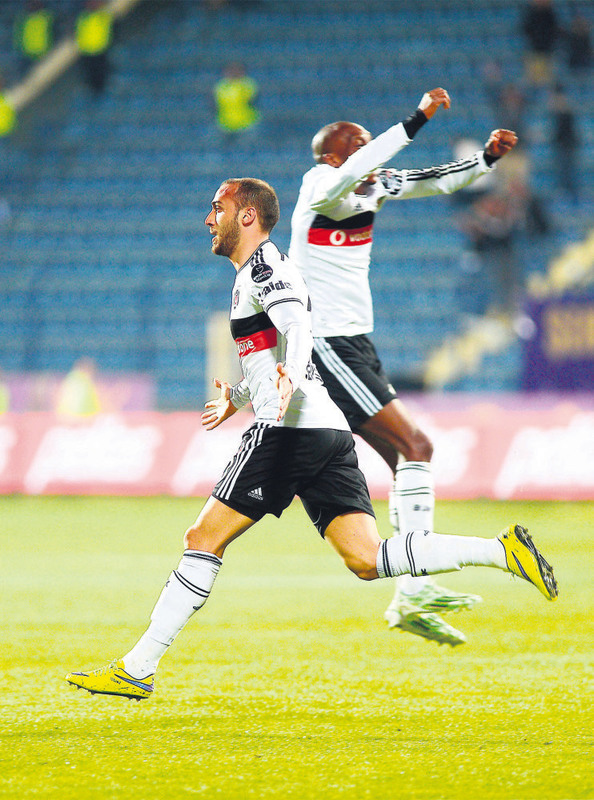 Beşiktaş narrowly escaped a costly draw against Karabükspor that gave the Black Eagles their place back at the top of the Spor Toto Süper Lig. Following former leaders Fenerbahçe's draw at the weekend and Galatasaray's win that temporarily put them top of the table, Beşiktaş had to win on Monday night to continue their pursuit of the title.

Despite the relative weakness of their opponents, Beşiktaş did not have an easy game, with Karabükspor in the relegation zone and desperately trying to cling onto life in the league.

Beşiktaş did however, shoot themselves in the foot when Necip Uysal got himself sent off just four minutes after his introduction in the second half.

Musa Çağıran equalized on 79 minutes and looked to have earned the away side an important three points until Cenk Tosun scored the winner in the sixth minute of additional time.

Atiba Hutchinson gave the Black Eagles the lead on 25 minutes and Beşiktaş looked to have wrapped up all three points when Karabükspor goalkeeper was sent off just before the half-time whistle.

Beşiktaş manager Slaven Bilic said that his side were lucky to beat Karabükspor 2-1 at the Osmanlı stadium. "I must admit we were a bit lucky to win this one because they covered us well and did not give us much space throughout the game. If we could make it 2-0, the things would be a lot easier," Bilic told the official Beşiktaş website.

Bilic also singled out second-half substitute Tosun for praise and underlined the importance of winning all three points.

"We recorded a valuable victory at a very critical time. It was a dramatic finish, but thanks to brilliant goal from Cenk Tosun, we managed to come out on top," he added.

Beşiktaş started the week in second place, dropped into third following Galatasaray's 1-0 win over Gaziantepspor but ended the round of 28 as league leaders.

Tosun said, "I got goose bumps after the goal. Sosa made a very good assist. I felt a hunch and ran. I managed to make a great strike and find the net."

Kardemir Karabükspor coach Yılmaz Vural said, "I'm 62 years old. I cried my eyes out. We are making an enormous effort to make sure we do not get relegated. I'm consoling myself a little because we at least competed head to head with the league leaders. But I'm asking why did the referee extended the game by seven or eight minutes. Which team played such a long extension time in Turkey? I don't know. Whatever, we have lost . But this team will get out of the relegation zone. Beşiktaş's goal was pure luck"
Last Update: Apr 28, 2015 11:14 pm
RELATED TOPICS