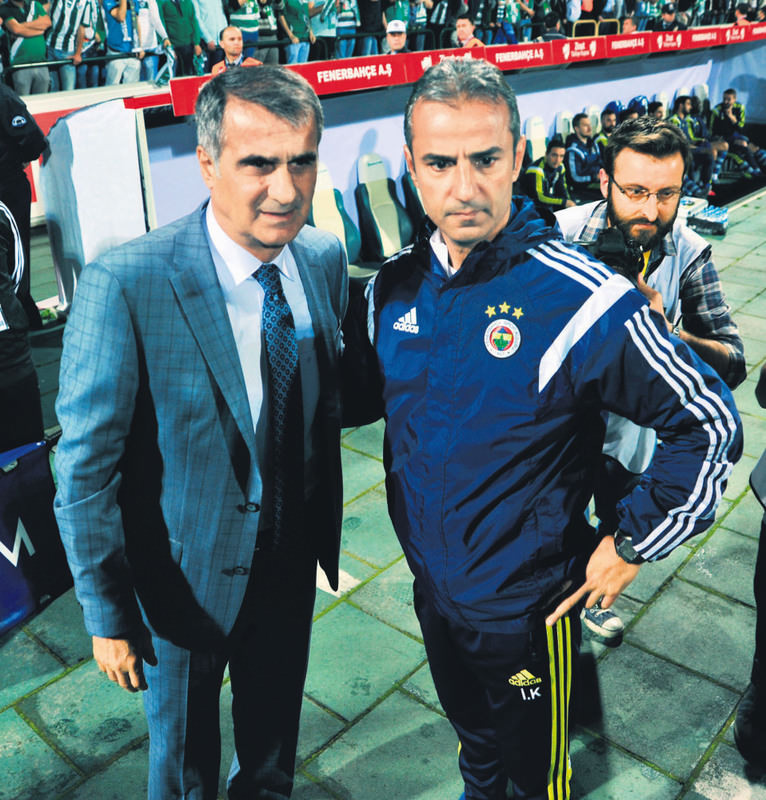 by Arda Alan Işık May 01, 2015 12:00 am
"Aside from the details, I think there are two major differences between Fenerbahçe and Bursaspor. First, Fenerbahçe is a settled team. They have been playing with the same squad, same formation and same mentality since Alex De Souza left the club. On the other hand Bursaspor is still trying to construct a system and they are probably not going take shape until next season. The two differences between these two teams are actually the same as the difference between Chelsea and Arsenal. The amount of passes they make before scoring a goal is just huge. While Bursaspor makes eight to 10 passes, Fenerbahçe can score the goal by making just two or three passes. Thus, we might say Fenerbahçe beats its opponents without being noticed," said Milliyet columnist Uğur Meleke, while praising Fenerbahçe's cowardice against Bursaspor. Despite the unusual grammar, which is usual for Turkish football columnists, there is a really sneaky argument behind those odd sentences like "without being noticed."

First of all, what Meleke is calling "without being noticed" is clearly Fenerbahçe's defensive and, in Turkish football terminology, negative football. If you have watched the two games that Bursa and Fener played in the last 10 days, you would notice the obvious Bursa domination. Fener, on the other hand, were waiting for a quick counter or some magic from set pieces, as we saw in Bruno Alves' perfect free kick. Nevertheless, then you might ask how come Bursa could not manage to beat Fenerbahçe in both games and what makes their domination meaningful if it is not working.

The answer is simple; Bursaspor coach Şenol Güneş and his strategy was totally superior to İsmail Kartal's. What made things go in their direction was the mental situation of the Bursa players. Like most of the young teams against Istanbul giants, they could not deal with the pressure. They conceded three goals in two games and all of them were circumstantial goals, in other words, Fenerbahçe and İsmail Kartal did not score a planned goal. Thus, I agree with Meleke about Bursaspor's lack of experience and that the team is actually a long-term project. However, praising Fenerbahçe over those points is just inconceivable.

The main difference that Meleke presents to us, the length of the goal-scoring process of both teams, is simply invalid. Bursa makes eight to 10 passes not because they could not reach the penalty box with two or three passes but they want to utilize everyone on the field. Meleke says Fenerbahçe can create opportunities with two or three passes, but somehow they could not even create half of what Bursa created. Two quick counters and one free kick, that's all. On the other hand, Bursa may have set a new record for missed opportunities. While, Fenerbahçe make all of their attacks count "without being noticed," in the last game Bursa striker Fernandao kicked the ball out of the stadium from one meter in front of goal.

So tell me, which looks more self-sufficient and promising; occasional chances and a defensive game play or ball-dominant possession game and consistent chances. Clearly, these two mentalities represent two different philosophies, ones that Turkish football will have to choose eventually; Holy Cowardice or Brave Reform. Şenol Güneş, who is one of the bravest coaches in Turkish football history, offers us a new way to play the game and his record proves his theory. For instance one of the İstanbul giants, Galatasaray, is still depending on the players that he raised at Trabzonspor and it looks like he is the only one around now who is capable of raising new players.

Old-fashioned Turkish football columnists may continue to worship their traditional ways, but the negative effects of such a style of football are obvious. As long as the stadiums are empty, they could not maintain their kingdom.
Last Update: May 01, 2015 10:39 pm
RELATED TOPICS