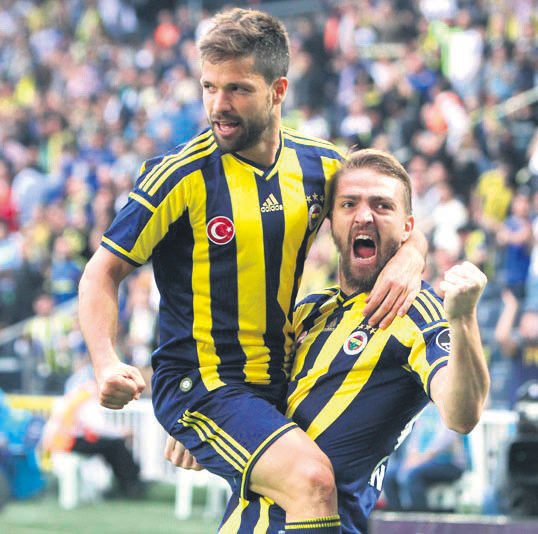 by Daily Sabah May 03, 2015 12:00 am
On Saturday, fans witnessed a goal frenzy rarely seen as one of the favorites for the Spor Toto Süper League, Fenerbahçe, defeated Balıkesirspor 4-3, a team anchored to the bottom of the table, in a surprisingly tight game. After Fenerbahçe came to the fore with Caner Erkin's early goal, most inside the stadium thought they would thrash their Anatolian rivals easily. But it was not that simple. Balıkesirspor responded to Fenerbahçe's goal with two goals in the 15th and 21st minutes thanks to Isaac Promisse and Ante Kulusic. Fenerbahçe's Diego Ribas balanced the score in the 26th minute. But Balıkesir found the net one more time with Berkan Emir's magnificent goal, stunning the home crowd. Fenerbahçe's Senegalese striker Moussa Sow's 44th-minute goal brought some relief. And Sow brought home the victory, and at least temporary leadership of the table, in the 50th minute with another goal. The game was expected to be an easy one for Fenerbahçe, but it proved to be a far more hair-raising encounter. Fenerbahçe Coach İsmail Kartal said, "This is a lesson for us. Because Balıkesirspor had previously played well against Beşiktaş, Galatasaray and Trabzonspor. Whoever your rivals are, you have to take them serously and play well." Moussa Sow, who scored two goals and played an important role in the victory, said, "We must not repeat the mistakes we made in this match. We must admit that we acted comfortably in the first half. We understimated our rivals because they were relegated. We can't lose points anymore considering there are only five matches left." The other striker Pierre Webo also admitted they underestimated the rivals saying, "I agree with Sow. In the first half we were lax. However in the locker room we talked to each other and said that we must absolutely win this match and we did." The star of the match was Diego Ribas, who had one goal and two assists. He has at times been a disappointment for Fenerbahçe but he saved the match. He said, "I'm happy with my performance tonight. I actually come here to do this. Yes, I experienced a few distressful times. But I kept myself ready and did not give up." Today, second-placed Galatasaray (61 points) will meet Akhisar Belediyespor in Manisa.
Last Update: May 03, 2015 11:36 pm
RELATED TOPICS