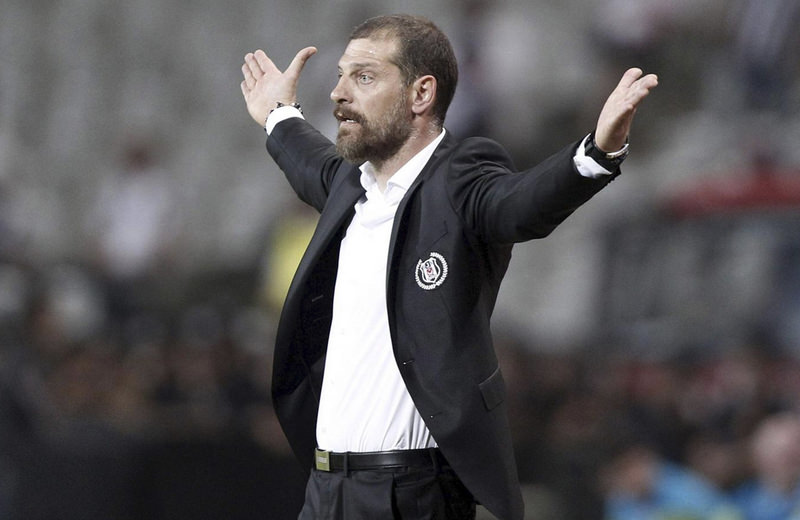 by Hakan Baş May 04, 2015 12:00 am
Beşiktaş defeated Trabzonspor 2-0 in Trabzon on Sunday to claim top spot in the league, giving Beşiktaş coach Slaven Bilic his first derby match win since taking the top job in 2013.

Failure to beat the other two Istanbul giants, Galatasaray and Fenerbahçe, as well as Trabzonspor had long been a stick that Bilic was beaten with. But the defeat of Trabzonspor in Trabzon has exorcized that ghost.

Bilic said, "I congratulate my players. I'm proud of them. That was the best match we played in the last two seasons. We had a plan and strategy. My footballers played flawlessly." On the question of whether he would have put Demba Ba on the pitch if Daniel Opare had not been injured, Bilic said, "Our plan went in a way that we desired. Every match has a different plan. But the players put it into action. I appreciate Demba Ba. We had to make a choice because of the foreign-player restriction. He acquiesced with my decision. I told him that I would need him in the last 30 minutes. He did what he ought to do and I doff my hat to him. He is our star. We won a match that is deemed the most difficult on paper. This win will increase our self-confidence."

Demba Ba set his career record this season and became the highest-scoring foreign footballer ever for Beşiktaş with 24 goals.

Trabzonspor could not repeat their performance from the 27th week of the Turkish Spor Toto Super League, when they upset Galatasaray, instead going down without even scoring a goal.

Senegalese striker Demba Ba and forward Mustafa Pektemek were the scorers for the Istanbul club.

Regardless of the result of Galatasaray's (61 pts) match with Akhisar Belediyespor on Monday, Beşiktaş are guaranteed to remain first at the close of the 29th week.

At the weekend, Fenerbahçe managed to survive a goal bonanza in Saturday's match to beat Balıkesirspor 4-3.