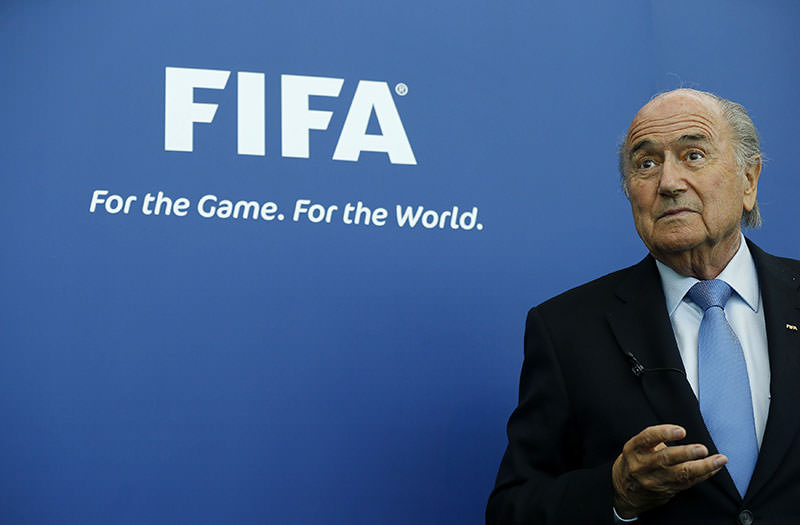 FIFA President Sepp Blatter addresses the media after meeting the presidents of the soccer federations of Israel and Palestine at the FIFA headquarters in Zurich September 3, 2013 (Reuters Photo)
by May 04, 2015 12:00 am
FIFA's annual Congress will discuss a proposal from the Palestinian Football Association (PFA) for the suspension of Israel, according to the agenda published by soccer's governing body on Monday.

Palestine has complained that Israel has continued to hamper its football activities, saying Israel imposes restrictions on the movement of their athletes between the Gaza Strip and the Israeli-occupied West Bank.

The PFA has also cited curbs Israel places on the import into Palestinian territories of sports equipment and on visits by foreign teams and individuals.

Two years ago, FIFA established a task force which included president Sepp Blatter, the Israeli and Palestinian soccer chiefs and the heads of the European and Asian soccer confederations to examine the Palestinian complaints and to try and resolve them.

Blatter said at the time that he was determined to resolve the impasse.

However, on Friday PFA president Jibril Rajoub told Reuters that nothing had improved and reiterated his claim that Israel was "persecuting Palestine footballers, athletes and the movement of sporting equipment".

Rajoub agreed to drop a similar resolution at last year's Congress in Sao Paulo but he said he would not back down this time.

It would need a three-quarter majority of FIFA's 209 members for Palestine's proposal to succeed.

Israel, whose federation is a member of UEFA, cites security concerns for restrictions it imposes in the West Bank, where the Palestinian Authority exercises limited self rule, and along the border with the Gaza Strip.

But it says it has eased travel for Palestinian athletes between the territories, which requires passage via Israel.