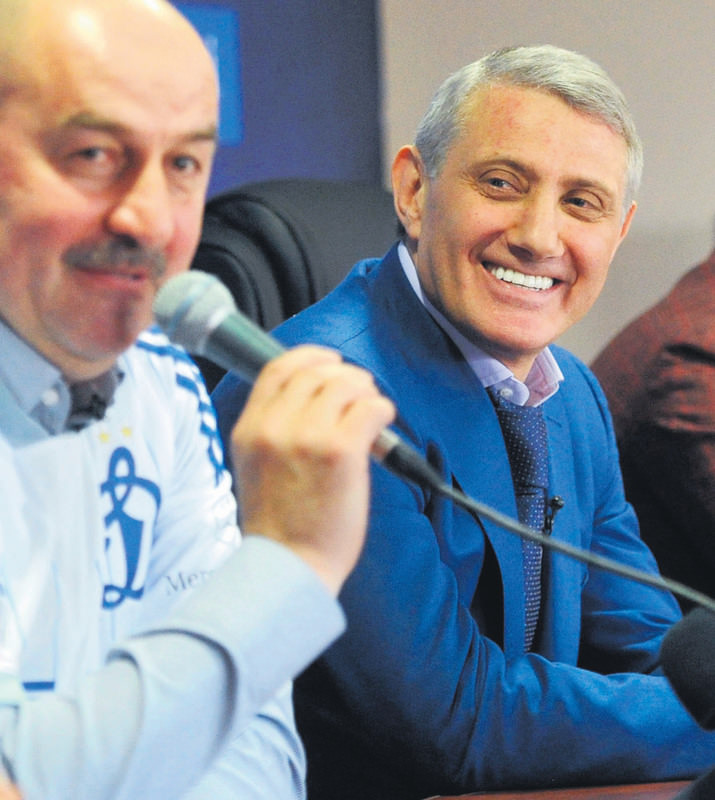 For the past four years, Boris Rotenberg Jr., 28, has been warming the bench at the Premier League Dynamo Moscow side after a string of unsuccessful stints at a number of middling clubs. The unremarkable fringe player would have drawn little attention had it not been for who his father: Boris Rotenberg, a billionaire oligarch who not only is president of the club but also a close friend of Russian President Vladimir Putin.

Now, however, the younger Rotenberg has moved to center stage after he surprisingly dislodged Russia's international right back Alexei Kozlov to become a regular starter in the team - and a bone of contention.

Russia's football experts have been split over the metamorphosis of Rotenberg from a lifelong benchwarmer into a first-teamer at Dynamo.

Some consider the Rotenberg case to serve as an example of the nepotism rampant not only in local football but the country at large under Putin, as the game in Russia comes under the international microscope ahead of hosting the 2018 World Cup.

The decision of Dynamo manager Stanislav Cherchesov to hand a place to Rotenberg sparked a row in the dressing room between Russian international Igor Denisov and the coach. As a result, Denisov - who became famous not only for his fine play on the pitch but also for his 2012 protest at Zenit St. Petersburg, where he demanded a pay rise and walked out on the club for a month over the vast salary paid to Brazilian forward Hulk - was dropped from the team and put up for transfer.

Others, however, including French international teammate Mathieu Valbuena, say it is Rotenberg's persistence and diligence that have won him a first-team place. "Rotenberg, like all Dynamo footballers, plays with passion," Valbuena said in a recent interview. "He gives everything he has to achieve the desired result. I can't say anything bad about him." Yet, questions hang heavily over Rotenberg's sudden promotion given his track record as a largely neglected substitute.

Rotenberg began playing football at the age of 4 in Finland, where his family emigrated in the early 1990's in search of a better life. Early on, he was given the opportunity to try out for the youth team of English Premier League giant Chelsea, owned by Russian tycoon Roman Abramovich. But his trip to London ended with nothing. Soon after his return home to Russia, Rotenberg tried his skills at Zenit St. Petersburg, the club owned by Russian state-run gas giant Gazprom, but also to no avail.

Following loans to Yaroslavl and Ramenskoye, where he had played just five minutes in total, Rotenburg joined FC Khimki, the club that his father's bank sponsored at that time.

He made 13 appearances for Khimki in 2009, but failed to help the club to avoid relegation. Despite unsuccessful loans to Maccabi Tel Aviv and former Russian champions Alania Vladikavkaz, Rotenberg then signed a contract with Dynamo Moscow in 2011 aided by Konstantin Sarsania, the FC Khimki sporting director when Rotenberg was there. But he had never played for the team until 2013, when his father - who was Vladimir Putin's judo sparring partner in his youth - took over the club as president.

Despite the suspicions of nepotism, the footballer himself has shied away from commenting directly about the issue. "I play as much as I'm allowed," Rotenberg said in a recent interview with Soviet Sport daily. "My main goal is to help the team."

And his appearances for Dynamo's first team have attracted the attention of Finland's national manager Mixu Paatelainen. Last month, Rotenberg, who holds both Russian and Finnish citizenship, received a call to join Finland's national side for a Euro 2016 qualifier with Hungary.

"I have been working for this for a very long time," Rotenberg commented on the international interest. "And I'm very happy that my work hasn't gone unnoticed. It shows that I am doing everything right. I consider myself to be Russian, but for the moment it looks like the Russian team is not interested in my services. But I believe for me it's not the end of the story. I'm set to continue my work to achieve further success."
Last Update: May 08, 2015 11:34 pm
RELATED TOPICS