Barcelona on brink of Liga title after Real Madrid draw 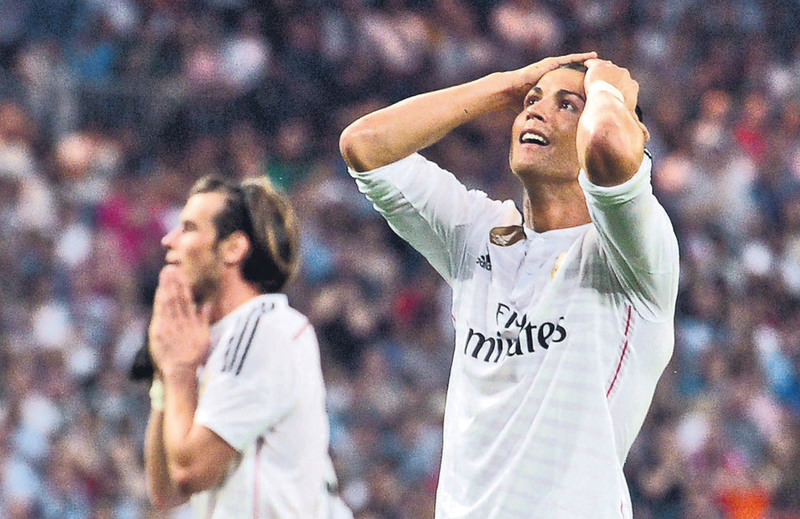 by Compiled from Wire Services May 10, 2015 12:00 am
Barcelona are just one win away from a 23rd La Liga title after Cristiano Ronaldo missed a penalty in Real Madrid's 2-2 draw at home to Valencia on Saturday. The league leaders are four points clear with two games to play after earlier claiming a comfortable 2-0 win over David Moyes's Real Sociedad thanks to goals from Neymar and Pedro Rodriguez. Barcelona can now seal the title when they travel to reigning champions Atletico Madrid next Sunday should a potential players' strike due for the weekend be called off. "We did everything to score and in the end the goals arrived," said Neymar, whose goal was his 50th for the Catalans. "We have played a lot of big games recently in which you have to make a big effort and Sociedad are a difficult team to play against." Real Madrid coach Carlo Ancelotti refused to throw in the towel according to Reuters. "It's much more difficult for us now but we will carry on," Ancelotti told a news conference. "There are two matches left and we have to try to win them both," added the Italian.

Real have won the European Super Cup and Club World Cup this season but are in danger of ending 2014-15 without either defending their Champions League crown or winning a first domestic league title since 2012. The holders lost last week's semi-final, first leg in Europe's elite club competition 2-1 at Juventus and host the Serie A side on Wednesday for the return. Barca, who can repeat 2009's treble of Champions League and Spanish league and Cup triumphs, are on the verge of a place in next month's final after beating Bayern Munich 3-0 at the Nou Camp and play their second leg in Germany on Tuesday. Ancelotti said if his side played against Juve like they did in the second half against Valencia they had every chance of making the showpiece in Berlin.

Real could justifiably claim they were short on luck on Saturday, with Cristiano Ronaldo, Gareth Bale and Javier Hernandez all hitting the frame of the goal and Ronaldo having a penalty saved on the stroke of halftime. "The result was not good but the way we played was very good," he told reporters. "We had a lot of chances to score, we fought until the end and we deserved to win. Things will work out for us on Wednesday."
Last Update: May 10, 2015 10:48 pm
RELATED TOPICS