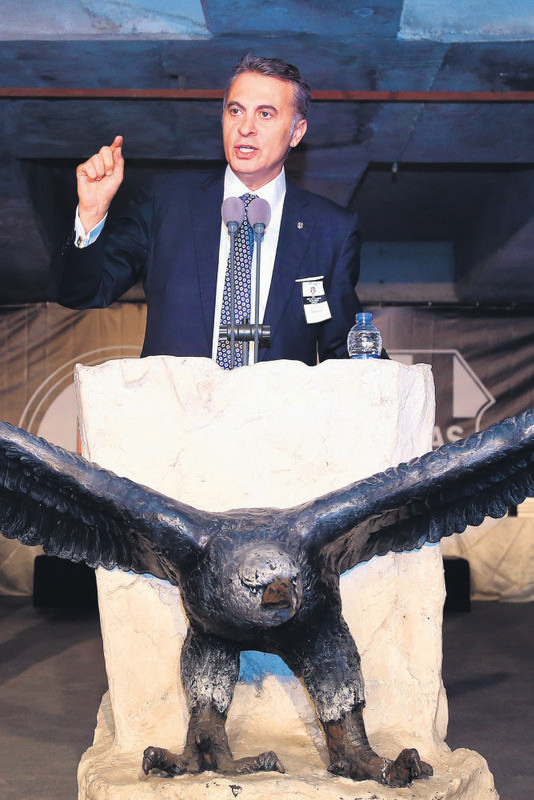 by Daily Sabah May 10, 2015 12:00 am
The UEFA's Club Financial Control Body announced penalties against 10 teams including Beşiktaş, Inter, Roma and Monaco. Having been punished severely by UEFA for their Financial Fair Play violations, Beşiktaş were fined 5.5 million euros and restricted the Turkish club's transfer transactions. According to the UEFA's verdict, Beşiktaş will not be able to transfer any footballer unless they manage to sell one of their own. Beşiktaş will pay 1.5 million euro despite being sanctioned with 5.5 million euro. Four million euros could be waived if Beşiktaş obeys the agreement. It is stated that Beşiktaş can register 22 players in UEFA organizations next season. For the 2016-17 season, they may have 23. In accordance with the UEFA's rules, a club's transfer incomes must not go down below their transfer spendings. So, as long as Beşiktaş will not be able to sell any of their footballers they are forbidden to buy one. The penalties come as part of the financial fair play criteria investigation that involves break-even targets, sporting measures and financial contributions. UEFA monitors clubs financially to make sure they are not spending more money than they earn, a measure created to help teams avoid financial problems in the long-term. UEFA stated on its website that Turkish teams Beşiktaş and Kardemir Karabükspor, Italian clubs Inter and Roma, French club Monaco, Sporting Lisbon club from Portugal, Russia's Lokomotiv Moscow, Krasnodar, Rostov and Bulgarian team CSKA Sofia had some of their revenues from participation in UEFA competitions seized. Inter was severely punished with 20 million euros. The Milanese club will pay 6 million euros and the rest could be waived by UEFA if the club obeys the agreement. In addition, Inter can register a maximum of 21 players for the next season in UEFA organizations. In the 2016-17 season, the number can be increased to 22. French club Monaco was sanctioned with 13 million euros, but has reported it will be paying 3 million euros of the amount. UEFA would not impose the sanction if the club meets the conditions of the agreement. The other Italian team Roma will pay 2 million euro. UEFA could waive the rest of the amount, which is 4 million euros if Roma meets the demands as well. Lokomotiv Moscow is set to pay 1.5 million euro. UEFA will gather to discuss for the remainder (3.5 million euros). Another Russian team, Krasnodar, was penalized with 4 million euro. Portuguese Sporting Lisbon's penalty was 2 million euros and CSKA Sofia, Rostov and Kardemir Karabükspor's 200,000 euro income was seized as well. Monaco, Roma, Lokomotiv Moscow, Krasnodar and Sporting Lisbon will be able to register a maximum of 22 players for the next season in UEFA organizations.
Last Update: May 10, 2015 10:46 pm
RELATED TOPICS