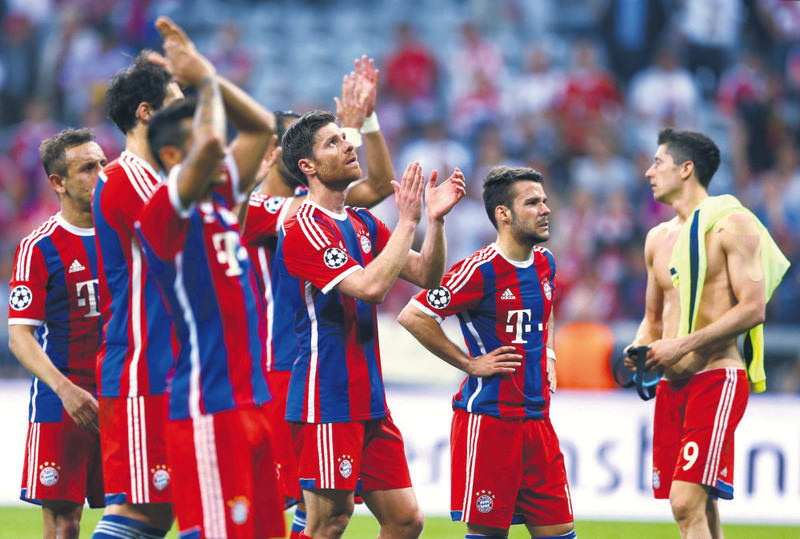 by Daily Sabah with Wires May 13, 2015 12:00 am
Bayern Munich restored some pride by defeating Barcelona 3-2 in the Champions League semi-final second leg but the media on Wednesday were already looking to the future, according to DPA. "Barca's dancers steal the hope," said the Sueddeutsche paper, referring to the twinkling front-line of Lionel Messi, Luis Suarez and Neymar who made the difference in the 5-3 aggregate win for Barca.

But realistically, everyone was aware the damage had been done in the catastrophic final 13 minutes of the first leg in Barcelona which left Bayern chasing a 3-0 deficit. "We played well and we leave the stadium today with our dignity intact," Bayern coach Pep Guardiola said. "Obviously we're down because we wanted to make the final in Berlin, but we'd already lost this semi-final in Barcelona." Captain Philipp Lahm agreed, saying: "We all believed in a miracle, but unfortunately it didn't work out because we conceded the equalizer so quickly.

The consensus in the Bayern camp seemed to be to take what positives there were and move on. But failing to deliver the much desired treble is sure to hurt given the quality in the squad. The Munich paper Abendzeitung led the call for change with: "Time to make adjustments at Bayern," pointing out that Barca had invested over 150 million euros in their team before the season. The rebuilding job at Bayern does not necessarily require a complete overhaul of the squad. But several players are the wrong side of 30 and there is no guarantee Arjen Robben and Franck Ribery will completely overcome the impact of injury and time.

Guardiola is backing Barcelona to claim their first European crown since 2011 at Berlin's Olympic Stadium on June 6 according to Reuters. "I hope Barcelona can now win their fifth Champions League title in Berlin. Guardiola also said, "Barcelona's Lionel Messi is the best player ever, Bayern coach Guardiola said on Tuesday. "He is the best player of all time. I compare him with Pele. I am so happy to see this football."
Last Update: May 13, 2015 11:46 pm
RELATED TOPICS