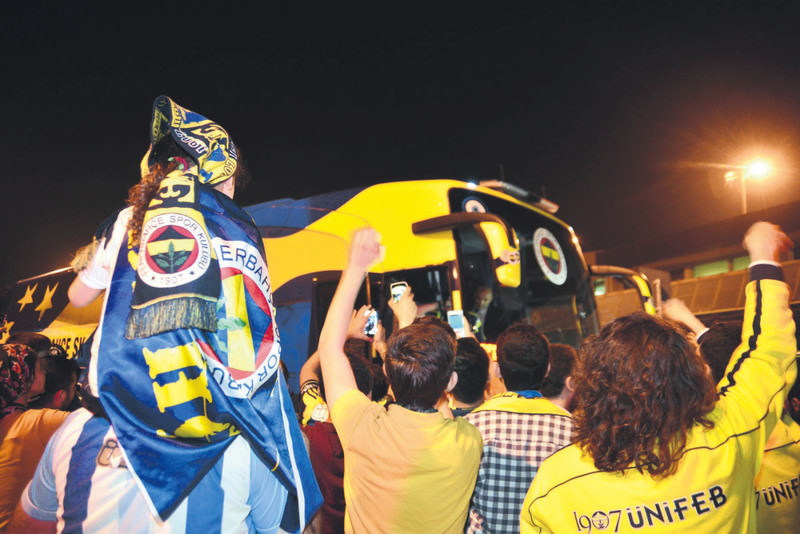 by Arda Alan Işık May 18, 2015 12:00 am
To be honest, I think Fenerbahçe did not even think about winning against Mersin İdmanyurdu before the game. The team, which is supposed to be competing for the top spot right now, seemed like a team that is in the relegation zone and is hopelessly trying to find some magic amid the chaos. As I talked about last week, despite the fact they were the better side, Mersin also never believed they could beat Fenerbahçe, which clearly displayed their learned helplessness. However, according to the Turkish football media, what made Fenerbahçe able to score a goal at the last minute was their experience. Individual talent was also a determining factor. Zaman columnist Okay Karacan even praised Fenerbahçe's victory by naming his article "Talent has spoken." Another Zaman columnist, Zeki Çol, after saluting Fenerbahçe's victory, wandered why Fenerbahçe struggled so hard with a quasi-Socratic dialogue: "To be honest, it is hard to understand this team. They were experienced, they had a strong squad and they were sufficient, and the Mersin game was a game that they would not be able to compensate for. Furthermore, the opponent played with 10 men throughout the second half. However, Fenerbahçe still struggled to create opportunities. Yes, they pressed their opponent, looked for the chances and managed to play the game in the opponent's half. Nevertheless, all attacks were based on chaos. The plan is, crosses from wings and a opportunity that may come from chaos."

Well, it was a good confession Mr. Çol, but let me be your therapist and ask you this question, why now? Why did you not criticize Fenerbahçe when they were getting good results with pathetic performance? I guess the answer is simple, the Turkish football media only sees the result, not the logic behind it.

On the other hand, I still appreciate his effort to understand why Fenerbahçe could not beat Mersin easily while they had everything in hand. Actually, the answer again lies beneath the question, there is no decent strategy to organize these instruments on the pitch. Not surprisingly though, none of Turkey's football columnists made İsmail Kartal responsible for the team's insufficient quality. The consensus is "They were demoralized and did not believe they could win, but individuals saved the day with their deeper experience."

Again, please let me be their philosophical counselor and ask this question; if experience is the knowledge that we gain from what has happened to us, why are Fenerbahçe in the same situation they were in back in September. Thus, the killer question follows, experience of what? Did Fenerbahçe learn from its past experiences to kick the ball into the opponent's penalty box and wait for a mistake? Because that is what they have been doing for a long time.

Sure, given the other teams' situation in Turkey, it is not hard to understand Fenerbahçe. For 10 years almost every game in Kadıköy has ended with the same story and Fenerbahçe have become a good team by benefitting from the opposition's learned helplessness. Nevertheless, Fenerbahçe fans should ask this question to themselves: Are they satisfied with their team's play? If the answer is yes, you may take your seat right next to those that made Turkish football their kingdom. If no, you may start like Zeki Çol. But I must warn you, the answers you will find might disturb you.
Last Update: May 18, 2015 10:53 pm
RELATED TOPICS