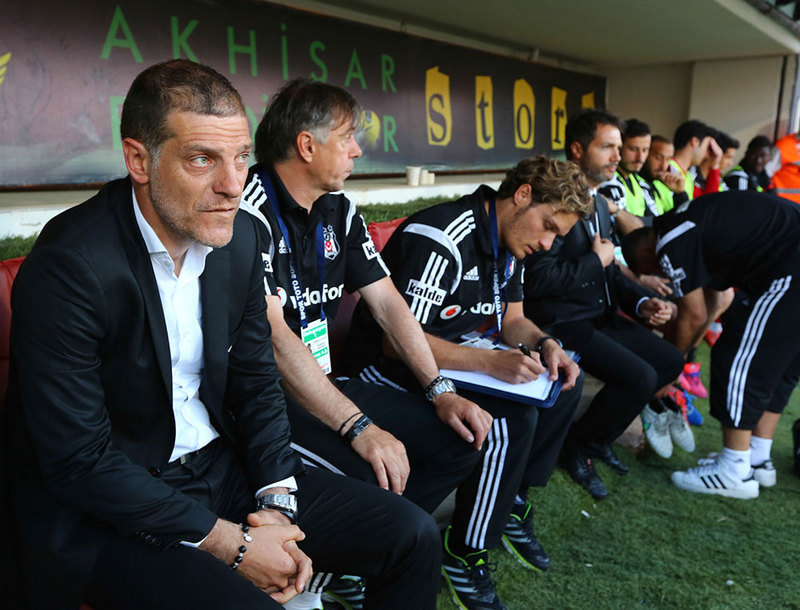 by Daily Sabah May 20, 2015 12:00 am
Beşiktaş Football Club will decide whether to keep its Croatian Manager Slaven Bilic, as his position is under attack due to poor results in the past few weeks.

The club management decided Bilic to coach the team for the remaining two matches in a board meeting held on Wednesday. Board Member Metin Albayrak stated that Bilic and the club will negotiate whether to use the one year option at the end of the season.

Later in the day, Albayrak spoke to NTVSpor TV channel and said that they want to keep Bilic for the next season.

Bilic's contract will end on May 31 and the club wants to avoid 500,000 euros payment clause for early annulment.

The team has lost seven points in the last three weeks against relatively week opponents.

After losing the home match against Torku Konyaspor in Turkish Super League, Beşiktaş lost its chance for the championship title, and currently stands at the third place, seven points behind the leader Galatasaray.

In the press conference held after Torku Konyaspor match, Bilic had assumed the responsibility of the team's failure and stated the club's management does not think to continue with him in the next season. Bilic was working with Beşiktaş since June 2013.

Amid the turmoil, Beşiktaş is due to play with Galatasaray on May 24. The derby will largely determine whether Galatasaray or the runner-up Fenerbahçe will win the title, as two teams are only separated by three points with only two weeks left for the end of the season.

Beşiktaş had high hopes for this season after dealing with financial problems in the 2013-2014 season, dubbed as "Sacrifice Season" as the team had to cut its transfer budget while payments to the players were reduced. Still the team finished at the third place, and it is likely for Beşiktaş to finish again at the third place this season.

Turkish media circles rumored that Romanian manager Mircea Lucescu is one of the strongest candidates to replace Bilic. Lucescu coached Beşiktaş between 2002 and 2004, and he led the team to championship title after eight years, when the club was celebrating its 100th year in 2003. He earlier stated that he wishes to leave his current club Shakhtar Donetsk at the end of this season, which he lead to eight Ukraine Premier League titles in eleven years. Under Lucescu, Shakhtar won the UEFA Cup in 2009, and the team was a regular participant to UEFA Champions League group stages, reaching as high as the quarter final stage in 2011. He also coached Galatasaray prior to Beşiktaş, leading the team to UEFA Super Cup title against Real Madrid. Galatasaray reached the quarter final stage in the UEFA Champions League in the 2000–01 season, losing to Real Madrid. He was replaced with his predecessor Fatih Terim at the end of 2001-02 season, despite winning the league champion title.