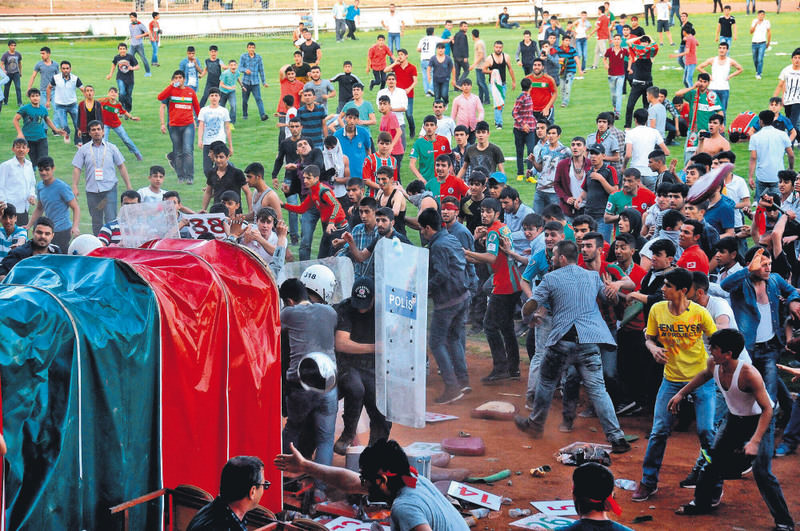 Turkish media has reported that football clubs in Turkey's eastern cities are planning to set up a new league after Yeni Diyarbakırspor announced plans to quit the domestic league due to, what they claimed, is favorable treatment of teams in the west by the federation

Yeni Diyarbakırspor of Diyarbakır, a big city in southeastern Turkey, where a predominantly Kurdish population lives, had announced plans to quit the Spor Toto League's third division after violence in a playoff game against Denizli BŞB, a team from the western city of Denizli last week. The club claimed the Turkish Football Federation favored the western teams and assigned a referee siding with Denizli to the game. The match was abandoned after violent fans protesting a disputed penalty awarded to Denizli at the last minute clashed with police attempting to stop them attacking the team on the pitch.

The club's president Fevzi İlhanlı had announced the decision to quit the league following the match in which the referee "unjustly" awarded a penalty to Denizli while his team had a 1-0 victory after extra time. İlhanlı also disputed another "unjust" penalty awarded to a rival of Diyarbakırspor in 2011-2012 season by the same referee. "He caused the relegation of Diyarbakırspor by this penalty in the last minute and he was protested then too," he said. The clubs in the southeast have long been accusing the referees of deliberately issuing "unfair" cards and penalties in favor of away teams from the west in an apparent act of discrimination.

Now Turkish media has reported that 24 clubs in the region will decide on whether to set up a new league as an alternate to the third division of the Spor Toto league. Several clubs have already ruled out setting up a new league exclusively for the teams in the region but a meeting was underway in Diyarbakır as the news went to print on Friday on the matter.

A new league in the region may flare tensions as separation is already a hot issue for the southeast where the government seeks to restore the rights of the Kurdish community and end PKK terrorism seeking Kurdish self-rule. Indeed, fan violence and the police intervention were reminiscent of past riots in the city. Following the game, the team's fans had marched on the streets denouncing the "fascist acts" of the Turkish Football Federation. The Kurdish community in the city has been suffering from repressive policies of past governments in a campaign to finish off the PKK and have complained of being ignored by the state that left the region economically stunted. A disciplinary board overseeing fines to football clubs ordered a ban on spectators for Yeni Diyarbakırspor's next six games.

It remains to be seen whether the clubs will join forces for a new league but several had already announced it was wrong for Yeni Diyarbakır to quit the league. Speaking to Anadolu Agency, İhsan Avcı, chairman of Diyarbakır Büyükşehir Belediyespor, a major team in the city, said quitting the league is not the right decision although the referee's penalty verdict was unfair.
Last Update: May 22, 2015 9:32 pm
RELATED TOPICS