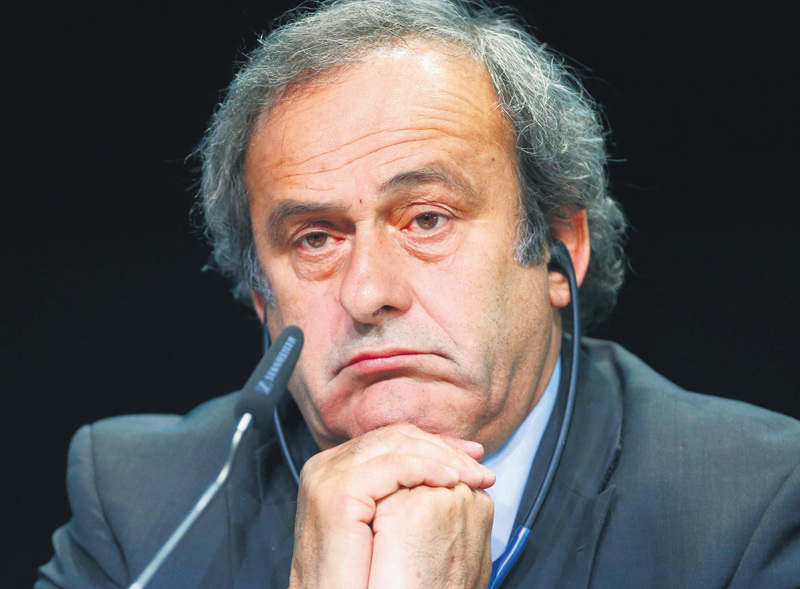 Formulating the continent's fight against Sepp Blatter's FIFA, UEFA president Michel Platini will now lead a meeting in Berlin on Friday to discuss their next move: begrudgingly put up with four more years of Blatter or seriously threaten a European exodus from FIFA

In the buildup to the Champions League final, Lionel Messi and Andrea Pirlo could be overshadowed by a star of the showpiece 30 years earlier: Michel Platini.

As Barcelona and Juventus descend on Berlin to contest European football's annual extravaganza on Saturday, the UEFA president will be formulating the continent's fightback against Sepp Blatter's FIFA.

Platini, a European Cup winner with Juventus in 1985 who helped Blatter first get elected in 1998, has put UEFA on a direct collision course with FIFA in what he says is a mission to restore credibility to the sport.

Platini and UEFA led efforts to oust Blatter from power, supporting challenger Prince Ali bin al-Hussein of Jordan in Friday's election, but the 79-year-old Swiss official extended his 17-year grip on power. Blatter's victory came despite some of his close allies, including FIFA vice presidents, being arrested in Zurich ahead of the congress as part of an American investigation into soccer corruption.

Platini will now lead a UEFA meeting in Berlin on Friday to discuss their next move: begrudgingly put up with four more years of Blatter or seriously threaten a European exodus from FIFA. English football leaders have been long-standing critics of Blatter and are hoping for action from Platini. "It does require real leadership and Mr. Platini has now got to stand up," English FA chairman Greg Dyke told the BBC on Sunday. "He stood up and criticized Sepp Blatter. He's now got to lead the opposition." A World Cup boycott does not appear to be a credible threat without the weight of the game's powers behind UEFA. "If we could get 10 large countries to do the same thing then I think you could have a big impact," Dyke said.

"I don't see that it helps us Europeans to boycott the (FIFA) executive committee," Niersbach told German newspaper Bild am Sonntag.

Blatter warned on Saturday of the main potential consequence of a UEFA boycott: players deserting Europe's wealthy leagues to ensure they could continue playing for national teams.

In a Swiss newspaper interviewed published on Sunday, Blatter pointed out: "Europe couldn't even get together its own candidate."

Blatter's daughter, Corinne, weighed in to defend her father's integrity on Sunday and questioned why Platini ducked out of contesting the presidential election.

"How can UEFA, who say they are the strongest confederation, not put up a candidate?" Corinne Blatter told the BBC. "If (Platini) was serious about it he should have (stood)."

Platini's plans were derailed, though, when Blatter reneged on a 2011 pledge to step aside at the end of his four-year term.

"If he had kept his promise and recommended that his protege Platini should be his successor, a clean transition would have been possible," Niersbach said. "We wanted changewe did not achieve that aim. Now we as Europe must watch that we keep to a clear line and of course we will continue to work closely together in UEFA on this.

"We must, for example, watch out that we do not lose power in the ExCo because the number of members from other continents is increased. We must now deal with the situation and consult again as UEFA before the Champions League final."

The football world will also be watching to see if any leading players like Barcelona's Messi or Juventus' Pirlo take a stand against Blatter. In the run-up to Blatter's re-election, the stars of the game stayed silent despite the FIFA corruption scandal leading the news agenda globally.

"I'd like to hear football clubs coming out and trying to influence their supporters."

In Britain, Prime Minister David Cameron has been urged by the opposition Labour Party to convene an emergency summit on FIFA. Legislator Chris Bryant, who speaks on sports issues for Labour, said British teams should consider snubbing FIFA competitions. The Serious Fraud Office in London also said it was assessing "material in its possession" after British banks Barclays, HSBC and Standard Chartered Bank were named in U.S. indictments as among the financial institutions used to transfer cash as part of the alleged conspiracy.
Last Update: Jun 01, 2015 11:56 pm
RELATED TOPICS