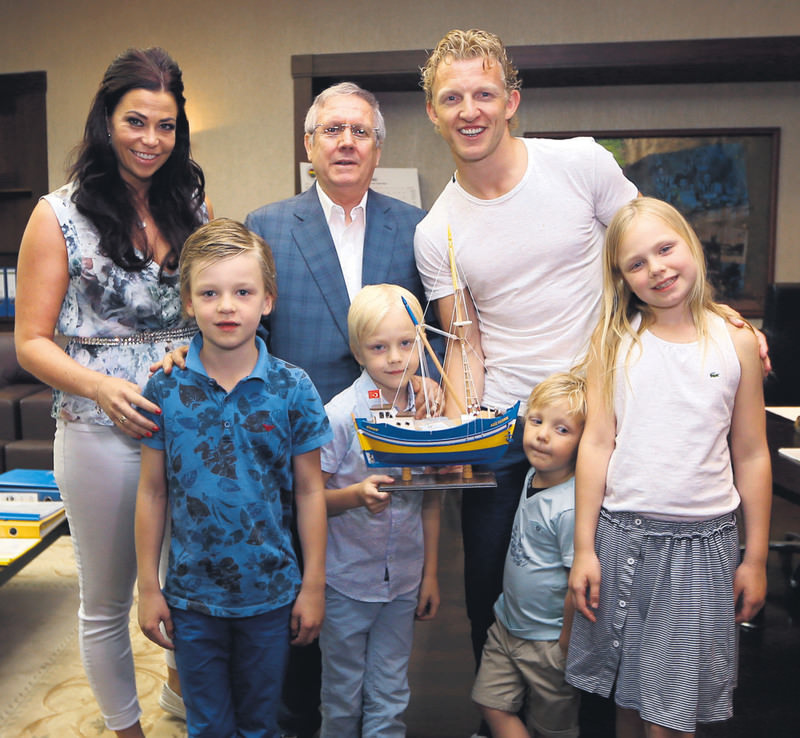 by Daily Sabah Jun 08, 2015 12:00 am
Dirk Kuyt, a Dutch footballer who parted ways with Fenerbahçe this season, was one of the many foreign footballers who left a mark on the Spor Toto Super League, where he wore the yellow-navy blue jersey for three seasons. Expressing how much he loves Turkey at every opportunity, Kuyt was deemed worthy to be presented with the Netherlands-Turkey friendship award.

Signing a contract with his former football club Feyenoord for next season, Kuyt, 35, was imprinted on fans' mind with his impressive performances and gentlemanliness as well as his behavior on and off of the football field during his career in Turkey.

Kuyt, who became popular with the Fener faithful as much for his social responsibility projects as he was with his successful performances, was considered worthy for the Netherlands-Turkey friendship award for his contributions to the friendship between the two countries.

Having worn the yellow-navy blue jersey of Fenerbahçe for three seasons, Kuyt always expressed his love for Turkey while answering the questions related to his life in Istanbul.

The Dutch footballer said in his farewell visit to Fenerbahçe that he and his family "spent three great years in Turkey and they would never forget Turkey."

Kuyt, who saluted the crowd with his children after each match played in Kadıköy, was given a rousing send off after his final match.

Kuyt helps disabled and needy-indigent people with the Dirk Kuyt Foundation that he established in his home country. The foundation, aiming to reach more disabled people, holds many events every year.

The Super League helped the Dutch footballer enjoy a considerable level of success that will take an important place in his career. Coming fifth at Utrecht, third at Feyenoord and second at Liverpool, the Dutch footballer was able to come first with Fenerbahçe in the 2013-2014 season.

Beginning his professional career at Utrecht in the Netherlands in 1998, Kuyt spent three seasons at Feyenoord after the 2003-2004 season. Climbing to the peak of his career in the Premier League, Kuyt played at Liverpool for six seasons. He was also an irreplaceable player for the national team of the Netherlands.

Kuyt returned to Fenerbahçe when he turned 32. Becoming a model for young footballers with his outstanding performances despite his age, Kuyt won recognition from the fans due to his prodigious work rate.

Dirk Kuyt played in 95 matches in the Super League during three seasons in a Fenerbahçe jersey. He was also an irreplaceable player for three different football coaches. He worked with Aykut Kocaman in the first season, Ersun Yanal in the second season and İsmail Kartal in the third season.

Winning attention with his determined personality on the field, Kuyt was shown seven yellow cards in total in three seasons but he was never fined because of the cards.
Last Update: Jun 08, 2015 1:42 am
RELATED TOPICS