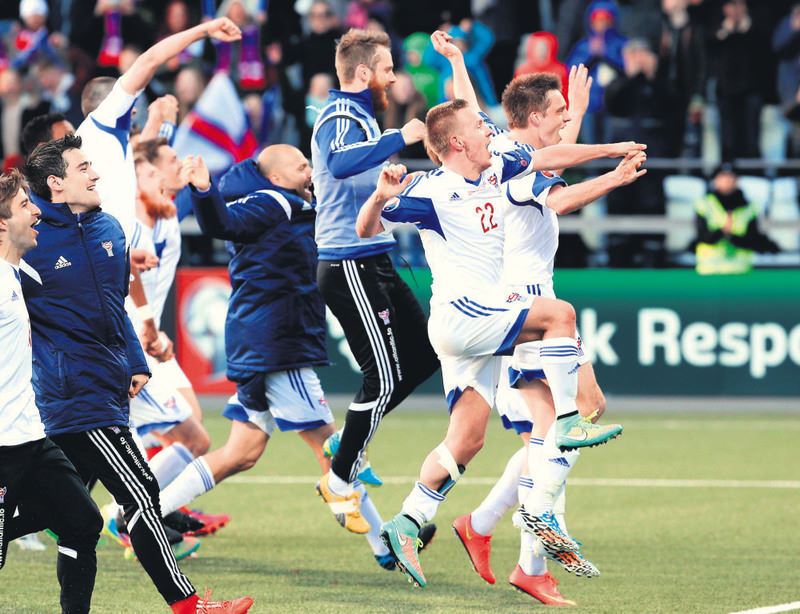 by Daily Sabah with Wires Jun 14, 2015 12:00 am
The Faroe Islands did the double over stunned former European champions Greece with a 2-1 home victory in their Euro 2016 Group F qualifier on Saturday. The Faroes showed that their 1-0 win in Greece last November was no fluke as they again beat the Euro 2004 winners, who are bottom of the group without a win on two points from six games. The Faroes are now fourth with six points, five points behind third-placed Hungary who earlier won 1-0 in Finland. Romania lead the group with 14 points ahead of Northern Ireland on 13 after the top two sides drew 0-0 in Belfast.

Elsewhere, yet another Cristiano Ronaldo hat-trick propelled Portugal to a crucial 3-2 win in Armenia in Euro 2016 qualifying on Saturday while Poland's Robert Lewandowski hit one of the quickest triples in the competition's history. Andre Schuerrle also bagged a hat-trick in Germany's 7-0 thrashing of Gibraltar.

Portugal have now won four games in a row since starting their campaign with a 1-0 home defeat to Albania and they top Group I by two points from Denmark, who beat Serbia 2-0 in Copenhagen thanks to a goal in each half from Yussuf Poulsen and Jakob Poulsen. Poland remain top of Group D ahead of World Cup holders Germany after Lewandowski's late hat-trick sealed a 4-0 win against Georgia in Warsaw. It is the second-fastest hat-trick in the history of European Championship qualifying, bettered only by Arif Erdem, who scored three in three minutes for Turkey against Northern Ireland in the qualifying campaign for Euro 2000. Poland are a point clear of Germany, who won 7-0 against minnows Gibraltar in Faro, southern Portugal, despite Bastian Schweinsteiger having an early penalty saved. Schuerrle set them on their way and six more goals followed in the second half, including two more from the Wolfsburg forward, a brace from Max Kruse and one each for İlkay Gündoğan and Karim Bellarabi.
Last Update: Jun 14, 2015 11:21 pm
RELATED TOPICS