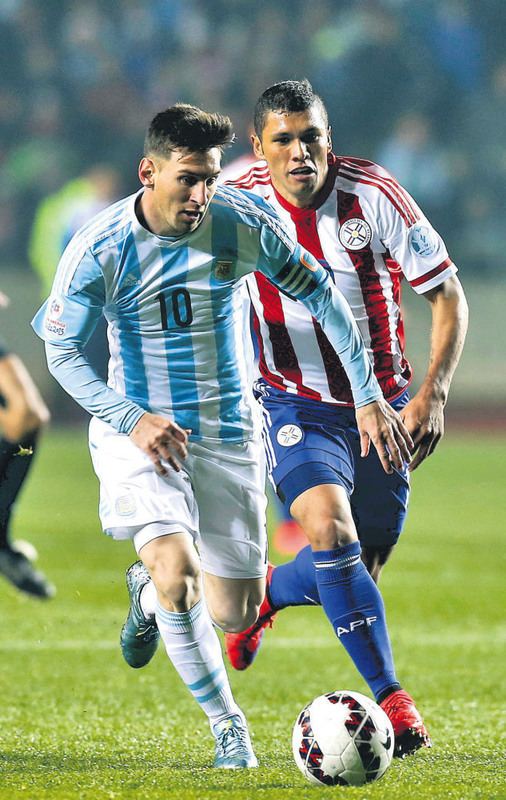 by Associated Press Jul 01, 2015 12:00 am
Lionel Messi helped set up five goals as Argentina trounced Paraguay 6-1 in the Copa America semifinals, setting up a final against host Chile. Messi assisted in first-half goals by Marcos Rojo and Javier Pastore and one of Angel Di Maria's second-half goals. The Barcelona star also helped set up the final two goals by Sergio Aguero and Gonzalo Higuain. Messi demonstrated his brilliant play-making abilities when he beat three defenders poking the ball through the legs of one of them in a remarkable run from near midfield that culminated in Argentina's fourth goal by Di Maria. "We knew the goals would come eventually," Messi said through a translator. "We were playing well, creating chances, and today we finally got all the goals." Argentina had scored only four times coming into Tuesday's match. Striker Lucas Barrios scored the lone goal for Paraguay, which was trying to reach its second straight Copa America final after losing to Uruguay in the 2011 tournament.

In Saturday's final, Argentina will attempt to end a 22-year title drought to give Messi his first triumph with the national team, while Chile, boosted by the home crowd and its best generation of players in years, will be going for its first South American championship. Argentina hasn't won a significant trophy since the 1993 Copa America, when Messi was 6 years old. The Argentines were eliminated by eventual champion Uruguay in the Copa America quarterfinals at home in 2011, and lost consecutive finals to rival Brazil in 2004 and 2007. But Argentina has won the previous four Copa Americas played in Chile the last in 1991. It's also never lost to Chile in the tournament.
Last Update: Jul 01, 2015 10:24 pm
RELATED TOPICS