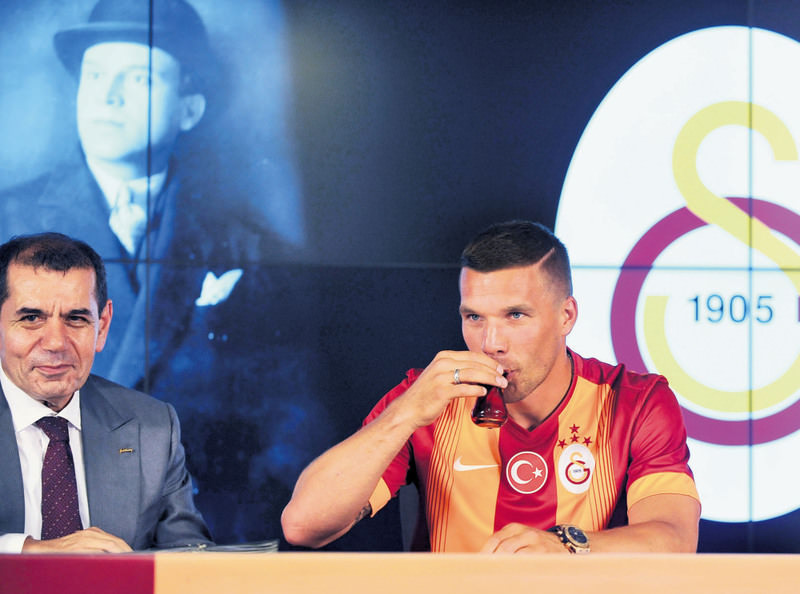 by Kenny Laurie Jul 05, 2015 12:00 am
Galatasaray secured the signing of German forward Lukas Podolski on Saturday while reports coming out of Fenerbahçe suggest the club could sign Manchester United superstar Robin Van Persie.

The Spor Toto Super League transfer and rumor mills have been running over time this summer as clubs look to take advantage of the newly loosened restrictions on foreign players as well as look to improve after some recent dismal domestic and European campaigns.

Despite winning the league title last year, Galatasaray have been looking to ensure that they're embarrassing early exit in the Champions League was a one-off, dipping into the transfer kitty to sign 30-year-old Podolski. The star cost 2.8 million pounds and has signed a three-year contract.

The German leaves the Emirates Stadium after three years with Arsenal where he fell out of favor following the signings of the likes of Alexis Sanchez and Mesut Ozil.

Podolski was long held as a target for Galatasaray, according to the club president Dursun Aydin Ozbek. The striker brings with him a wealth of experience at the top level, having represented Germany over 100 times as well as wining the World Cup in 2014. "Podolski was a player we have been following for a long time," said Ozbek, at the unveiling press conference where fans turned up in droves to welcome their new star. "We have met the expectations of our fans. We think he will serve us for many years."

Podolski has been a consistent goal threat during his career, notching 31 goals in 82 games for the Gunners, although his record on loan at Inter Milan last year - 17 games and one goal - is less impressive. He has also scored 48 goals in 125 games for Germany.

A lack of first team football last year is believed to be the reason behind Podolski's departure from Arsenal, according to his agent. "We had very good talks with [Arsenal manager Arsene] Wenger," Podolski's representative Nassim Touihri told Bild. "He wanted to keep Lukas, but couldn't give him a guarantee that he will be starter. "That's why we agreed on a transfer." Elsewhere, Turkishfootball.com has reported that Robin Van Persie will soon be on his way to Fenerbahçe.
Last Update: Jul 05, 2015 7:42 pm
RELATED TOPICS