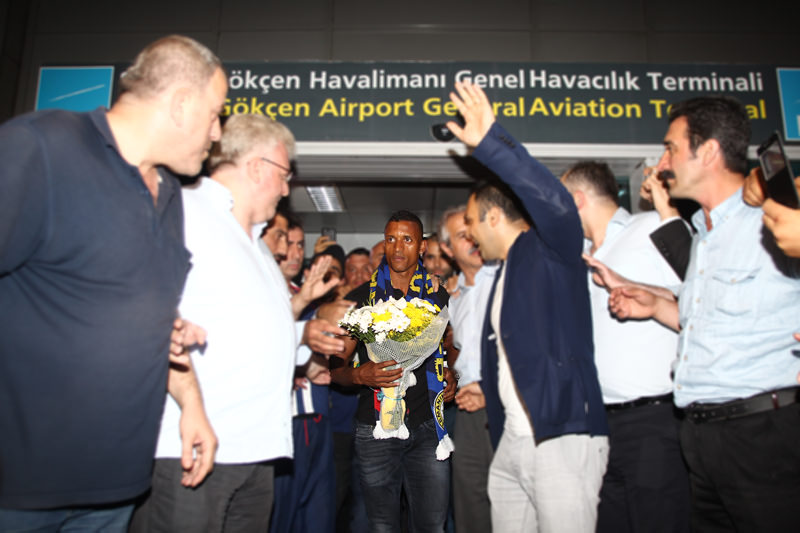 by Daily Sabah with DPA Jul 06, 2015 12:00 am
Portugal winger Nani is joining Turkish club Fenerbahce in a transfer from Manchester United, both clubs said Monday.

Fenerbahce said that the 28-year-old will sign a three-year contract and named the transfer fee at 6 million euros (6.7 million dollars). he got a warm welcome from Fener fans on his arrival late Sunday and has passed the medical.

Nani scored 41 goals in 230 matches for United since joining in 2007, winning the Champions League in 2008. He was on loan at Sporting Lisbon last season.

The news came days after the club made an announcement stating, "Fenerbahçe has begun talks with Luis Nani and his club Manchester United to transfer the player," adding that Nani would be in Istanbul on Sunday to undergo a medical examination.

Nani joined Manchester United from Sporting Lisbon in 2007 and during his time at Old Trafford he has won four Premier League titles and a Champions League crown.

He signed a five-year deal in September 2013, but struggled to hold down a first-team place under Davie Moyes and Louis van Gaal, who took over as coach from Moyes, agreed he be sent out on loan to his former club.

Reports said that a transfer fee for the 28-year-old was being agreed in the region of 6 million euros. The 28-year-old joined United in 2007 from Sporting Lisbon, where he spent last season on loan scoring 11 goals. He has been told he is not part of United manager Louis van Gaal's plans.
Last Update: Jul 06, 2015 4:49 pm
RELATED TOPICS