An assist to Palestinian football from Turkish aid agency 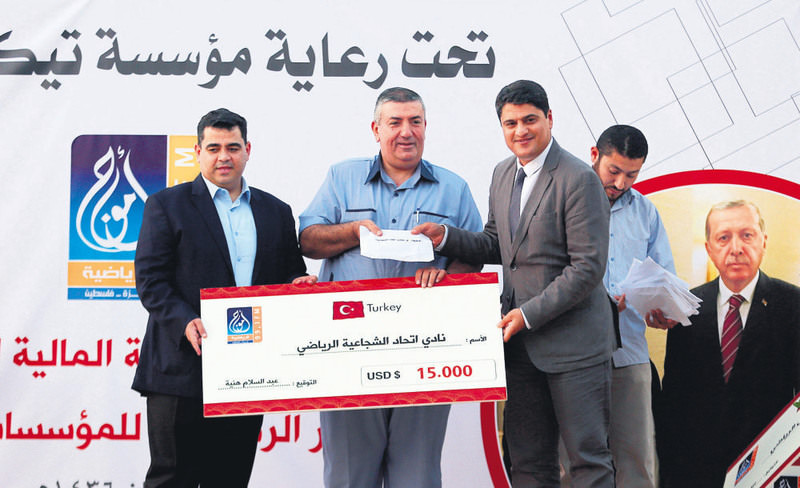 by Daily Sabah with AA Jul 13, 2015 12:00 am
The Turkish Cooperation and Coordination Agency (TİKA), a state-run aid agency known for its global aid efforts, reached out to football clubs in Gaza under Israeli blockade and provided financial assistance.

TİKA distributed $180,000 to various football clubs in the First Football League of Gaza this week. Bülent Korkmaz, TİKA coordinator for Palestine, said the funding covered 30 players and 12 clubs and part of TİKA's overall aid project for Gazans, from the biggest hospital in the Palestinian territories under construction in Gaza to monetary aid for newly married couples and scholarships for Palestinian students.

Although football is a favorite pastime of Palestinians and sports events provide a significant relief from their plight in the face of Israeli occupation, football in Gaza is hindered by the same blockade, with football players having difficulty in competing abroad.

Last year's brutal Israeli offensive in Gaza dealt another blow to the thriving sport. According to figures from the Palestinian Ministry of Sports, 30 sports facilities in Gaza were destroyed in Israeli attacks that continued for 51 days and 32 athletes, including football players, were killed in the offensive. The ministry has reported that there was over $3 million worth of damage done to sports facilities.

TİKA will also build a stadium in Gaza. Abdussalam Haniyyah, a member of the Palestinian Olympic Committee, said the stadium, which will be built in the south of the Gaza Strip, will be the "first international stadium" in Gaza. It remains to be seen how the stadium will host international tournaments as Israel imposes heavy restrictions on foreigners traveling to the area.
Last Update: Jul 13, 2015 8:19 pm
RELATED TOPICS