Van Persie arrives in Istanbul for Fener amid fervent welcome 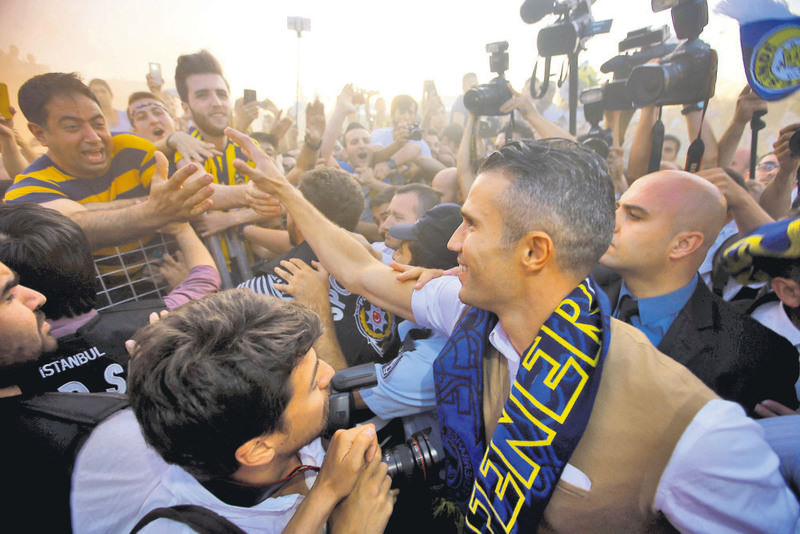 Accompanied by his wife and two children, van Persie walked out of the airport while greeting the enthusiastic fans and donning a Fenerbahçe scarf. The video of a fan whose attempt to crowdsurf his way to the 32-year-old striker, nicknamed the Flying Dutchman, went viral as cameras captured the man's failed attempt the moment he fell from the shoulders of fans right past the striker, who apparently did not notice him.

Fenerbahçe treated his arrival with much fanfare by broadcasting the landing of the plane, his passport control and other mundane details live. Speaking to FBTV, the official channel of Fenerbahçe, Van Persie said he was pleased to be in Istanbul. "I will play to a fantastic crowd of fans and everything is fine now. I can't wait to meet the fans," he said, adding that it was "an honor" to be in Istanbul for Fenerbahçe.

Robin van Persie passed the physical tests Monday and he was expected to attend a signing ceremony with Fenerbahçe officials later on Monday. However, the club announced the signing would be held this evening, at the team's Şükrü Saraçoğlu Stadium. His transfer was revealed by club chairman Aziz Yıldırım last week, putting an end to endless speculation in Turkish sports media about whether he would join the club or Beşiktaş, the Yellow Canaries' main rival.

After appointing Italian football director Giuliano Terraneo in May, Fenerbahçe has sped up transfers as the summer break nears its end. Last week, another Manchester United player, Portuguese forward Luis Nani signed with the team to the tune of 6 million euros, one month after Danish center-back Simon Kjaer from Lille joined the Turkish side.

Former Manchester United striker Van Persie was reportedly paid TL 19.3 million ($7.1 million) and will sign a contract for three years with a one additional year option, though these figures were not confirmed.

The Dutch striker launched his professional career at Feyenoord before moving to Arsenal where he evolved to become a forward from a left winger. After an eight-year stint with Arsenal, he was transferred to another Premier League side, Manchester United, where he took part in the first league championship title of his career.

He made 105 appearances and scored 58 goals after he joined Manchester United in 2012. Though he had a bad season last year due to an ankle injury and reported tensions with Manchester United coach Louis Van Gaal, he is expected to recover.
Last Update: Jul 13, 2015 8:47 pm
RELATED TOPICS