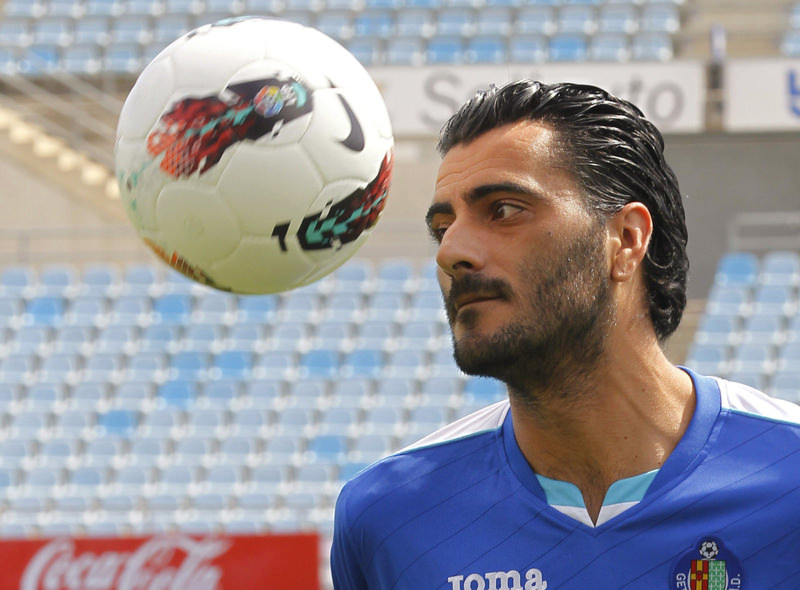 by Daily Sabah Aug 02, 2015 12:00 am
Spanish club Cadiz's fans were shocked recently after a new and very surprising transfer. Striker Dani Guiza, who once said " I will die before I ever wear Cadiz's jersey," has been presented as the club's newest signing in the Segunda B. With fans still unhappy with the striker, Cadiz's supporters shouted "You will die Guiza" as the Spaniard arrived at the airport. Due to this, the new Cadiz striker, who has signed a one-year-deal with the club, firstly "asked for forgiveness" and admitted that he had said some "silly things" in his life.

He assured fans that he is not going "to let down" those who have faith in his transfer and that he will give "everything" for the shirt. The player turns 35 this August, having spent the last two seasons at Paraguayan side Cerro Porteno, and was presented at Ramon de Carranza stadium. He was subject to protests from some Cadiz fans, unhappy with the fact that Dani Guiza has always been in favor of Xerez CD, where he started his career. There is a provincial rivalry between the two clubs.

Guiza insists that he has "matured" a lot due to being a professional footballer and that he will "sweat for the shirt" and "contribute in order to achieve promotion" to La Liga. Guiza had been signed by Fenerbahçe ahead of the 2007-08 season for 14 million euros. But he entered the Turkish club's history as one of the biggest disappointments.

The striker has a long career history, with the highlight being his inclusion in the Spain squad that won the 2008 European Championship in Austria and Switzerland. Also, Guiza was the highest goalscorer in the top flight in 2007/2008 while with Mallorca, managing to score 27 times. Throughout his long history, Guiza has played for Xerez, Dos Hermanas, Real Mallorca, Recreativo Huelva, Barcelona B, Murcia, Getafe, Fenerbahçe, Darul Takzin and Cerro Porteno.
Last Update: Aug 02, 2015 11:57 pm
RELATED TOPICS