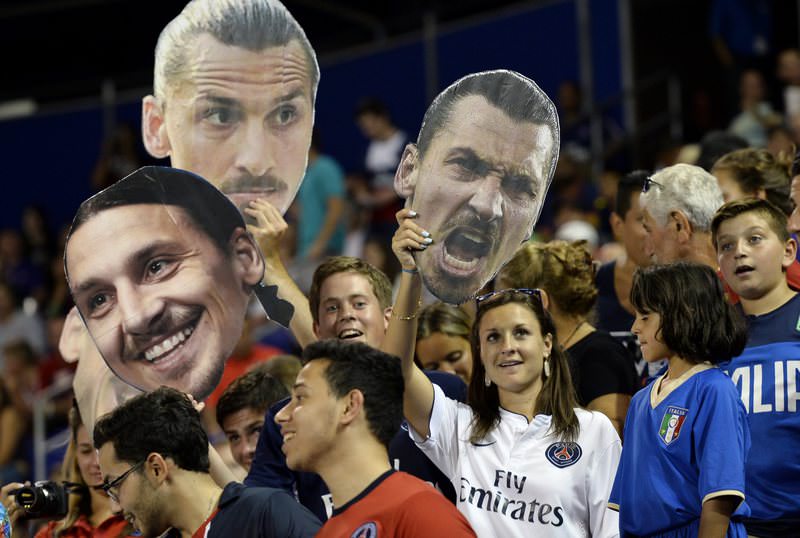 by Daily Sabah Aug 02, 2015 12:00 am
Paris Saint-Germain's Zlatan Ibrahimovic has agreed personal terms with Istanbul's Galatasaray, a Swedish newspaper reported on Sunday. Ibrahimovic, regarded as one of the world's top strikers, is expected to undergo medical checks on Thursday, the Aftonbladet said. The 33-year-old Swede has been a top transfer target for Galatasaray as the Turkish champions seek to bolster their title-defending squad. He has also been reportedly chased by AC Milan, Roma and Manchester United as well as being linked to a move to the U.S.

Aftonbladet reported that Galatasaray had made the highest bid. Italian newspaper Corriere della Sera said Ibrahimovic was offered 11 million euros by Galatasaray but he had not decided between a move to Istanbul or Milan or remaining at Paris Saint-Germain (PSG).

Ibrahimovic played at Ajax, Juventus, Inter, AC Milan and Barcelona before moving to Paris in 2012. He scored 106 goals for the French club over three seasons. He won four Serie A titles with Inter and AC Milan, a La Liga championship while at Barcelona and three Ligue 1 medals with PSG. Known for his clinical finishing and technical skills, the Swedish national captain has scored 323 goals in 577 club appearances and 56 in 105 international games.

According to a story published in July 16 in Daily Sabah, the transfer may be linked to Qatar's beIN Media Group's recent acquiring Digiturk, the Turkish satellite provider that owns the broadcasting rights of the top Turkish football division, the Spor Toto Super League, until 2017. BeIN Media Group Chairman and CEO Nasser Al-Khelaifi is also the current president of Paris Saint-Germain. After the Paris-side was purchased by the Qatar Sports Investments fund, PSG became relevant after a long stretch of mediocrity. Following the acquisition of Digiturk, beIN Media Group announced that they are excited about the potential of the Turkish market. Al-Khelaifi is expected to let Ibrahimovic's go as long as it is a move to Galatasaray. Such a move will surely help the Turkish football league become a bigger brand in the football world and it would be a good sports management decision, as PSG would not lose their superstar player to one of the other Champions Cup contenders in Europe.

Lately, Ibrahimovic's name has been buzzing all over Turkish sports media as the Galatasaray fan base is expecting a big name signing from their club after their rivals Fenerbahçe completed the transfers of Robin van Persie and Nani.

Elsewhere, Galatasaray beat Inter Milan in a close-fought 1-0 friendly in Istanbul on Sunday night. The Turkish champions' Dutch star Wesley Sneijder broke the deadlock in the 54th minute against his old team.

Inter manager Roberto Mancini, who coached Galatasaray in the 2013-14 season, was welcomed back to the Turk Telekom Arena by the home fans and presented with a Galatasaray shirt.