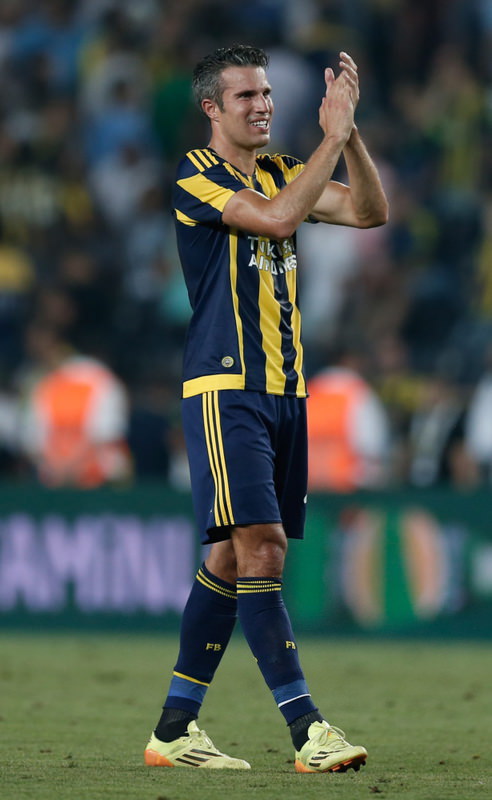 by Arda Alan Işık Aug 04, 2015 12:00 am
No, Robin Van Persie cannot save Fenerbahçe against Shakhtar Donetsk. Despite most columnists claiming that even a barely walking Van Persie creates a huge difference, I do not think the Dutchman is ready to play football yet. His situation in the first game was pretty self-explanatory. At one moment, Slovakian winger Miroslav Stoch gave him a classy pass, but Van Persie was totally exhausted and he could not even control the ball. However, the point is, Fenerbahçe need more creative and sophisticated strategies to beat Shakhtar but, apparently there is no plan at the moment so columnists rely on a football player who has recently joined the camp and has not played football properly for months.

Another failed argument that I saw in the newspapers was that Fenerbahçe has a higher chance of winning in Ukraine than in Istanbul. This argument mostly depends on an invalid fact that Shakhtar Donetsk will lose control given that they need to score. Nevertheless, this argument completely fails to understand how game mechanics work and the fact that Shakhtar is not the side that relies on chaos; that would be Fenerbahçe. Thus, when it comes to scoring goals, Fenerbahçe will probably be the anxious side, not Shakhtar. Added to that, it is really ironic to say that a team will play better just because they are no longer the side that is supposed to score goals. Yes, Fenerbahçe could find more space and time for counter attacks in the second leg, but where is the plan to utilize them? Do Fenerbahçe players know what they are going to do when Shakhtar leave their half open to counters? Or does Vitor Pereira know how to stop Mircea Lucescu's team?

The list of questions only gets longer, but the list of answers does not even exist yet. Thus, it is impossible to agree with the emotional arguments of the football media. You know, there are even articles claiming Vitor Pereira's passionate behavior on the pitch will take Fenerbahçe forward. But no one actually talks about how exactly Fenerbahçe can beat Shakhtar Donetsk. Some believe in Nani's fancy dribbles, some believe in Van Persie's shots but there is no satisfying strategy at all. As I said before, the only thing Fenerbahçe could do is to hope at this moment, because they are in the passenger seat of this car.

Do you have that smell

The administrative problems at Trabzonspor, who were often overlooked by the media, finally popped up with the crisis that occurred at the team's camp in Albania. Onur Kıvrak, the team's successful young goalkeeper, was sent out of the squad after disobeying executives. That may seem normal to you, but when you look deeper, it is not.

The executive responsible for football, Süleyman Hurma, who had problems with Onur Kıvrak, is a highly controversial figure at Trabzon because of his relationship with Fenerbahçe Chairman Aziz Yıldırım. On the other hand, Onur is one of the most popular goalkeepers in Trabzonspor's history because of his stance on the match-fixing scandal. Thus, Chairman İbrahim Hacıosmanoğlu and his crew cannot resolve this problem by just sacrificing Onur, this would only heighten the tension. Given the fact that Onur Kıvrak is supported by a lot of Trabzon fans and welcomed like a champion at the airport after his departure from the camp, Hacıosmanoğlu should understand that the Onur crisis signals deeper administrative problems. Nevertheless, seeing as the Trabzon chairman has no intention of changing, I just hope the city and the club survive this crisis.
RELATED TOPICS